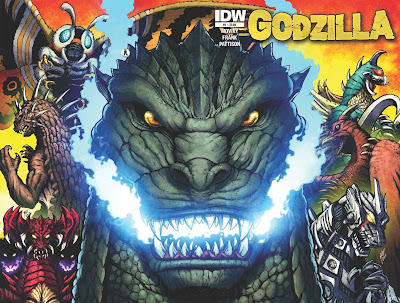 I just finished reading Issue #1 of Godzilla Rulers of Earth ,and I have to say I am very impressed. Just look at the picture of this cover it is just so badass! The artwork is great, the little Easter eggs that they hide in the pictures are awesome, this comic just continued to impress. This is the first Godzilla comic series I have read, I did own a few of the old old....really old comic books but I do not really remember them, and I am not sure if I even still have them. This first book gives me high hopes though for the series.
The story starts off with a submarine and they are picking up something big on their radar heading towards Hawaii fast, they suspect it is Godzilla but soon discredit it because they say it is moving way to fast to be him. The comic then moves to the Grand Canyon where Gigan rise from the ground but Kumonga is there to greet him in battle. Kumonga gives Gigan a hard time but Kumonga then becomes cripples in the fight, and Gigan escapes. We see the shadow of some sort of alien race that was controlling Gigan but the way the aliens are talking makes it sound like they are in control of
more monsters. The comic than cuts a conference that is discussing the current state of Kaijus on earth. During the convention Zilla begins to attack the city and right as he is about to kill someone he gets blasted by Godzilla. I don't want to spoil the whole comic for those who have not read it but that is the plot of the first issue summarized, I left out some details. The first Easter eggs I spotted in this comic was a toy model of Gotengo the super submarine ship from Atragon. The second Easter egg is when a girl attending the conference went to here hotel room which was numbered 1954 and we all know what awesome movie came out that year.

This comic was great and I strongly urge everyone to go out and buy it or order it here and pre-order the next issue. I say pre-order because all though this comic as got great reviews and reactions from fans there is sadly far too few Godzilla fans out their and the sales did not reflect the quality of this comic. The lack of sales is endangering this series and the series might be cut short at the 4th or 5th issue if it does not improve at the release of the next issue. So please support this series ,and look out for a review of the "Godzilla Half Century War" complete series.
Posted by Whats The Goods? at 2:58 PM