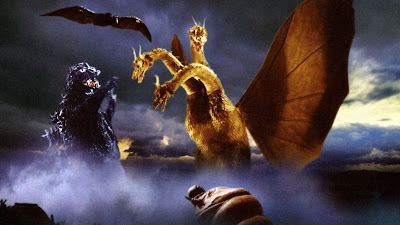 The Plot:
A detective is assigned to guard a visiting princess but before she arrives to Japan her plan is blown up in a bombing assassination attempt. The princess though jumps from the plan before the bomb explodes. In the mean time a meteor shower happens above japan and a large meteor crashes in the mountains. A group of scientist go to investigate the meteor ,and discover that it strangely has strong magnetic capabilities. The princess is then spotted in Japan but the detective discovers that she has lost knowledge of who she is and believes that she is an alien from Mars. The princess keeps giving warning of an impending doom coming to hurt planet earth. The princesses warning come true first Rodan thought to be dead rises from a Volcano following that Godzilla rises from the sea. The two monsters proceed to leave a path of destruction across Japan. The princess then tells the story of how Mars used to be a planet just like Earth until it was destroyed by Ghidorah. The princess further informs everyone that it is too late, Earth is doomed because Ghidorah has already arrived at earth and nothing can be done to stop it. After this happens the meteor that was being investigated by the scientist cracks open and out rises Ghidorah, the scientist then realize that the meteor was actually an egg. While all this is going on Mothra's twin fairies happened to be visiting Japan to make an appearance on a talk show. The fairies are then recruited to summon Mothra. The plan is to have Mothra unite with Godzilla and Rodan, to make them realize if they do not all of them will perish. The fairies successfully summon Mothra to Japan but when Mothra arrives Godzilla and Rodan are to busy fighting each other to care about Ghidorah. After Mothra fails to persuade Godzilla and Rodan, Mothra goes off to fight Ghidorah by itself. Mothra arrives to fight Ghidorah but proves too weak to battle Ghidorah by it self as Mothra is only in its larva stage still. As it looks like the Mothra larva is about to bare witness to it's death Godzilla arrives to aide Mothra later followed by Rodan. The Godzilla, Mothra, and Rodan prove to be a powerful match against Ghidorah who retreats back into space. After the success of the battle Mothra returns to Infant Island with the twin fairies, Godzilla and Rodan go their separate ways. 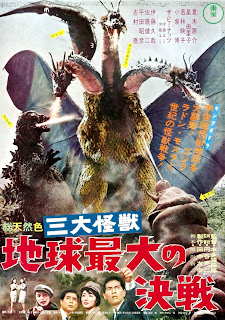 My Thoughts:
This was the second movie release of 1964 for to star both Godzilla and Mothra, Mothra vs Godzilla was the first. The biggest thing I wonder about this movie is where was the second Mothra larva? In Mothra vs Godzilla two Mothra larva hatch from the egg to defeat Godzilla. In this movie only one Mothra larva appears and the second is to never be heard of again. I find it very odd that they would only include one Mothra larva since both movies were released the same year it is not like the fans would forget that there was two of Mothra larva. This is my only issue with the movie I can only assume that one Mothra larva was used due to budget issues and that two Mothra larva might have been enough to cause Ghidorah problems that Godzilla and Rodan might not of shown up to help them. If their were two the dramatic impact of Mothra going alone to battle Ghidorah would not have been the same. Only the writers know the answer to the questions about Mothra.  We can only assume that there was one Mothra because of budget issues and for the dramatic impact of the fight scene. But Imagine what would of happened if they kept it with Two Mothras that eventually both changed into flying form and both had different color patterns on their wings the Godzilla Universe would be totally different. 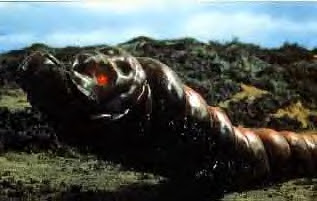 This was the first Godzilla film featuring four varieties of monsters which makes this a big staple in Godzilla history. I really enjoyed watching this movie and hope that if you are some new to Godzilla who has not seen this one yet please do because it is a great film. Please feel free to comment on this post.
Posted by Whats The Goods? at 4:44 PM