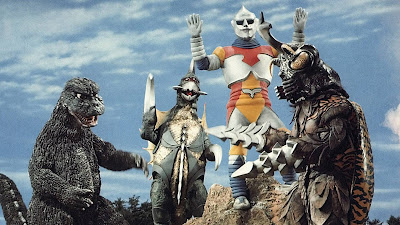 The Plot:
The movie opens with Nuclear testing in the ocean. We then see Anguirus and Godzilla on monster island caught in clouds of radiation and pollution from the testing. The movie then cuts to Seatopia where the people of Seatopians are angered because the testing has begun to harm their home deep underwater in Seatopia. They say that they are going to war with the people on the surface of earth and then rise up to once again inhabit the surface. We then see an inventor named Goro out with his nephew Rokuro and his friend Hiroshi. Rokuro is riding a fish shaped boat most likely made by Goro. The lake which Rokuro is ridding on begins to get rough and an earthquake occurs Goro and Hiroshi quickly pull Rokuro in to land and watch as the Seatopians drain the lake. 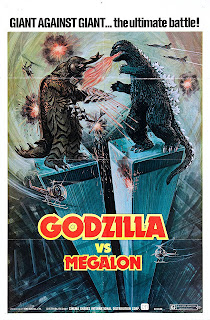 Goro, Rokuro and Hiroshi return home to discover their house has been broken into, the three enter and are ambushed by Seatopians and knocked out. The Seatopians escape by Goro, Rokuro and Hiroshi are confuse as to why they broke into the house nothing was stolen. Goro takes Hiroshi in the back and shows him Jet Jaguar, a robot which Goro invented to follow his commands ,but he is not yet completed. Rokuro goes out on his mini-bike while Goro and Hiroshi finish up the last touches on Jet Jaguar. While Rokuro is out on his mini-bike he is kidnapped by the Seatopians that broke into the house earlier that day. The Seatopians take Rokuro back to Goro but use him to trick Goro into opening the door the Seatopians break in take Goro and tie up Hiroshi.

The Seatopians send Goro and Rokuro off in a shipping container while they keep Hiroshi tied up at the house. The Seatopians reveal that they need Jet Jaguar so that they can guide the monster Megalon where to attack. The Seatopians summon the monster Megalon and he takes off for the surface off earth,Jet Jaguar is there to greet him and promptly guides Megalon to Tokyo to begin attack. Hiroshi manages to break free and track down the cargo container with Goro and Rokuro. Goro comes up with a plan to use a secondary voice controller that will over ride the controls that the Seatopians are using. Goro takes off in a helicopter with the military Jet Jaguar begins to attack the helicopter but Goro uses his voice command to stop Jet Jaguar in time to stop a collision between him and the helicopter. Goro then commands Jet Jaguar to go get Godzilla to help defeat Megalon. Jet Jaguar then takes off for Monster Island to get Godzilla. Megalon goes on a rampage after not being able to keep up with his fleeing guide Jet Jaguar. 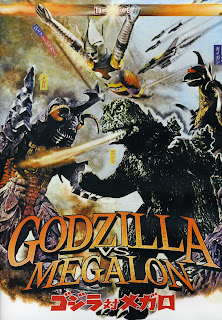 My Thoughts:
Although this film is a little corny at times like at the end when they play a Jet Jaguar them song, this is a great film for a Godzilla fan, it is often at times considered to be a horrible film, but as a Godzilla fan I find joy in watching it. Some thing that bugs me about it though is if the Seatopians are the humans who once inhabited the surface of the earth before what ever events drove them underground why didn't they come to the surface peacefully to coexist with the humans? They could of shown themselves long ago. The Seatopians never actually make contact with the human race to let them know it is them who are sending Megalon and Gigan. The only people that really know the Seatopians are responsible are Goro, Rokuro, and Hiroshi everyone else is oblivious to it. This whole movie could of gone a lot differently if the Seatopians were like "hey you are bombing us that's not cool" than the humans would be like "Oh sorry didn't know you were there won't happen again" but hey what can you do? then there would be no movie. Something interesting about this movie was that it was originally not intended to be a Godzilla movie, in fact it was suppose to be a children's movie staring Jet Jaguar it was originally going to be Jet Jaguar vs Megalon but it was canceled last minute and the movie was re-written to have Godzilla in it with Gigan. Jet Jaguar was created in a contest for children to submit drawing a movie would then be made based on it. What is funny about the fact that this was suppose to be a children's film is two thing, one the film involves a kid getting kidnapped jus like in the first Godzilla film intended for children Godzilla's Revenge ,and two there are nude pinup posters in the back of the cargo truck which is carrying the kidnapped child. I used to watch this movie on VHS as a kid and never noticed the boobage in the back of the truck but I discovered they were removed from the American version to give it a G-rating but the new version I just watched on DVD does not have a rating so that would explain the posters that I saw watching this film on DVD for the first time. Anyway those are some things I found interesting about this film, check it out if you are a new Godzilla fan and have not seen it yet. Thanks for reading, also while I was typing up this review I won an auction on ebay for a brand new sealed Godzilla vs Hedorah DVD which puts be only two DVDs away from having my Godzilla DVD collection complete I just need Godzilla vs Gigan and Godzilla vs The Sea Monster(Ebirah). So if there is a Godzilla film you want a review of keep an eye out because I will be reviewing all of them and hopefully I can get around to Gigan and Ebirah once I find them for a reasonable price. And now I leave you with the corny Jet Jaguar song enjoy...