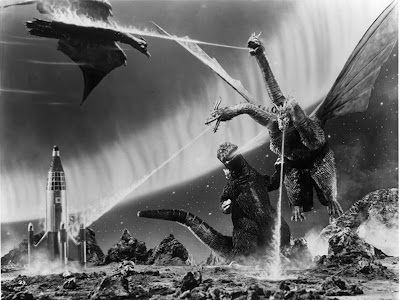 
The astronauts return to earth and tell the World Space Authority of the proposal they all seem very excited to have the cure for all disease on Earth. The military begins searching Lake Myojin and quickly discover that Godzilla is indeed slumbering and the bottom of the lake. While at the Lake a flying saucer rises from the lake and it is revealed to the people of Earth that the Xiliens were already there. The Xiliens seem to dodge an explanation as to why they came in secret to Earth instead of being straight forward. The Xiliens then use the flying saucer to lift Godzilla out of the Lake and the astronauts board the flying saucer to return to Planet-X for their disease research. While all that is going on at Lake Myojin the military had just arrived in Washigasawa to see another flying saucer blow up the mountain and pull Rodan out of it. When the Xiliens return to Planet-X with the astronauts they waste little time and unleash Godzilla and Rodan on Ghidorah they reveal that they can control the two monsters with magnetism. Godzilla and Rodan make short work of Ghidorah before Ghidorah retreats once again. The Xiliens are happy and give the humans a tape with the research on how to cure all disease the astronauts return to Earth in an exact copy of their World Space Authority ship.

The astronauts return to Earth and a conference is called immediately to go over the research. When the tape is placed in the player to the disappoint of the humans it does not play any research on disease but a warning from the Xiliens that they are coming to invade Earth with Godzilla, Rodan, and Ghidorah. The humans are in a panic and the attack begins. The astronauts remember that the Xiliens said that they can control the monsters with magnetism so they create a special weapon that will interfere with the magnetism control. They then discover from one of the astronauts girlfriends that she is an Xilien but she does not wish to take part in the invasion and she reveals that there is a certain frequency at which a sound could be played that hurts the Xiliens and their technology. When Godzilla and Rodan come the humans hit them right away with the special weapon. Godzilla and Rodan snap out of the Xiliens control and are not pleased they begin fighting Ghidorah. The sound being played on all speakers in Japan cripples the Xiliens and their ships begin to go crazy and explode. Rodan and Godzilla make quick work of Ghidorah once again. Godzilla and Rodan both tackle Ghidorah and go tumbling off a cliff into the ocean. Ghidorah rises out of the sea and retreats back into space. Godzilla and Rodan never rise from the sea the astronauts think that they survived but few believe that they may not have survived. One of the astronauts gets ordered to return to Planet-X I only assume it is to wipe out the rest of the Xiliens and the movie ends.

This movie was released a year after the 1964 Ghidorah, The Three-Headed Monster this movie is a follow up to that movie. Overall I enjoyed the story behind this movie much more than Ghidorah's first appearance. One thing I wonder is why didn't the Xiliens what Mothra? I assume that they thought Mothra would not leave Earth or be as easy to take control of. What I did like though is that by not including Mothra in this movie we see that Rodan and Godzilla have both decided to stay on the path of good with out Mothra forcing them to stay together like in the previous film. Another thing that I thought was strange was, why would the Xiliens reveal that they are using magnetism to control the monsters? and Why didn't the astronauts question why the Xiliens could not use that magnetism control on Ghidorah? If the Xiliens never told them that they can control the monsters with magnetism the humans may have never found away to break the controls and defeat them, Earth could have suffered a major loss. The astronauts should be smart guys why didn't they question how come Ghidorah could not be controlled that could of made it all seem a little strange right away. Another fault on the Xiliens part was even making contact in the first place. The Xiliens had the technology they could of saved them selves time and came straight to Earth woke both Godzilla and Rodan up and took control right away and flattened the place out they didn't need to drag the astronauts back to Planet-X and put on a show. Besides the Xiliens strategic flaws I have no issues with this movie this is actually my favorite out of the first three color Godzilla movies. This movie was really good and the story was really interesting.Ghidorah will always be in my book Godzilla's greatest enemy.
Posted by Whats The Goods? at 10:13 AM