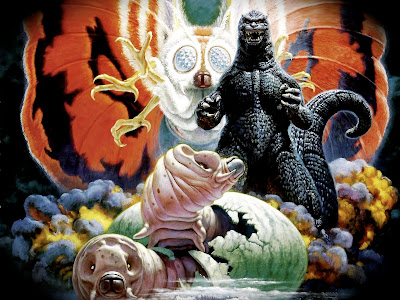 The Plot:
A Mothra egg washes a shore in Japan after a storm that ravaged Japan and Infant Island. Godzilla then rises out from under Japan and begins to reek havoc and lay waste to a Japan already hurting from the storm. A group of people travel to Infant Island to seek the help of Mothra, the island natives do not take kindly to the visitors from Japan because of the nuclear experiments Japan performed destroyed the island and the home of the natives. Mothra agrees to help stop Godzilla but Mothra is very weak and awaiting death. Mothra arrives just in time as Godzilla is about to destroy the egg. Mothra puts up a fight and causes trouble for Godzilla. Godzilla seems almost beat by Mothra but Godzilla unleashes his breath on Mothra which is the fatal blow that will finish Mothra. Mothra injured by the breath of Godzilla lands on its unhatched egg and dies. Godzilla continues on is path of destruction leaving Mothra's corpse and the egg behind.The egg hatches and reveals two Mothra Larva. Godzilla begins to head for an island off the coast off Japan where a group of children are stuck. The Mothra Larva take off right away after hatching and chase Godzilla to the island where the final battle takes place. The Larva cause Godzilla a ton of trouble with their web spray and end up forcing Godzilla to fall off a cliff into the sea where he retreats. 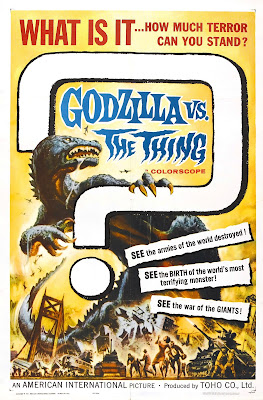 This movie is my first Godzilla DVD I have watched. I had owned every Godzilla, Gamera, and other Kaiju movie on VHS but it is time for me to make the move over since I have not been able to watch my VHS tapes for along time which means watching these Godzilla movies on DVD will be like reliving them all over again for me.

The thing about this movie that confused me was the fact that they referred to Mothra as "The Thing". I did some research and it seems that back when they released the movie in America that they did not want to reveal who Godzilla would be fighting in the movie. Mothra's twin fairies new Mothra was called Mothra, they called him Mothra The Thing when they first introduce him so why call Mothra "The Thing" through the whole movie? The problem I have with it is that the way they refer to Mothra it sounds like they are classifying Mothra's monster type as a Thing why not a Giant Moth? the word Moth is in Mothra's name, you look at Mothra and think Moth so why not? Their is no real explanation as to why they continued to use "The Thing" as the name through the movie. I could understand putting "The Thing" in the title to hide the identity of who was going to be fighting Godzilla but to carry it over through the film calling Mothra "The Thing" confused fans back when the film was first released ,and still to this day it does. Some believe that the movie studios were hoping to capitalize on the popularity of the movie "The Thing From Another World" and throw off the fans. I am just glad to know that after this film they refer to Mothra in later films as "Mothra" and not "The Thing". 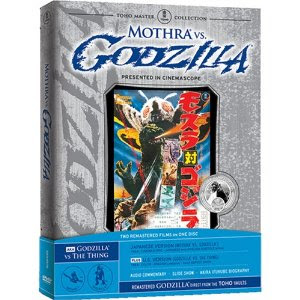 Another thing that I find interesting about this movie is the title change to Godzilla vs The Thing. Yes pretty much all the Godzilla movies have a different title in America but this one is different because really this is not a Godzilla movie. I say this is not a Godzilla movie because it is actually a Mothra movie the original title says it all Mothra vs. Godzilla. The movie mostly focuses around Mothra not Godzilla. The movie does have Godzilla in it he does play a big role in the movie but Mothra was the main focus through out the movie. The whole reason that they changed the title to Godzilla vs The Thing is quite simple, think about if you were an American living during the 60's when this movie was being released what would you rather see a follow up to the more known Godzilla movie or a follow up with a lesser known (at the time) Mothra? The decision is simple you want to see the more popular one first and that is why his name came on the cover first.
An interesting facts I discovered on Toho's website about this film was that originally this movie was suppose to focus on Godzilla more instead of the egg washing ashore it would've been Godzilla, and Mothra would only arrive at the end to save the day. Also in the earlier drafts of the script the Mothra egg and larva never appear in the movie. These change make you wonder what would have been if the script was not changed.

This movie is a great movie ,and if you are new to Godzilla I hope you pick up this movie and be sure to enjoy it. When it comes to Godzilla movies  a Godzilla fan can always enjoy them.