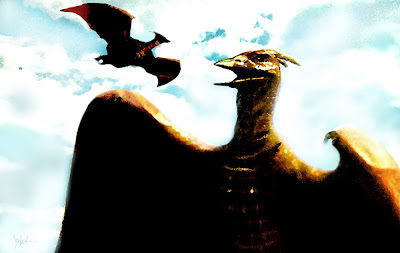 The Plot:
In a small mining village in Japan near a volcano two miners go missing after hitting a pocket of water that floods the mineshaft. A search party goes looking for them and they discover one of the miners bodies floating in the shaft. The body of the miner is taken to the hospital and it is discovered that the miners death was no result of an accident he was killed. The doctors can not identify what the weapon is that killed the miner. So a group of three miners and a police officer return to the shaft for the other miner that was missing from the accident, who they believe killed the miner that they found. The search party reaches the shaft and they hear a strange noise as they are walking through the water the first miner is pulled underwater by something, the officer begins shooting but he and the second miner are pulled down quickly, the third miner manages to run up the shaft and reach a phone he begins to dial to the mine headquarters but is killed by whatever is down in the shaft. When the bodies of the miners and officer show up in the hospital they begin to suspect that the victims had not been killed by a crazed miner but by something else.

The sister of the other missing miner is hiding in her house in the town because she is being threatened by everyone for her missing brothers alleged involvement with the murders. Her boyfriend Shigeru (the main character) arrives to comfort her, but as he arrives a large insect creature the size of a bear breaks through the back of her house. The town begins to evacuate as the police move in to kill the creature the bullets fail and a few men are killed before the retreat. The police call in the military but even their machine gun fire does not kill the creature. The insect monster retreats back into the mine shaft. The police and army pursue the creature into the cave but when the insect realizes that it is impervious to their bullets it begins to attack and kills more. Shigeru releases one of the filled mine carts at the top of the shaft and it crushes the insect. Shigeru then discovers his girlfriend's brother in the hole where the water came into the mine unfortunately he is dead. While Shigeru is trying to pull the body out he discovers more of the creatures in the cave created by the water the police and military start firing in the hole to kill the creatures but the gunfire causes a massive cave in
and Shigeru is buried along with the monsters.

A few after the cave in Shigeru's body has still not been discovered and an earthquake occurs in the town. It is discovered that the earthquake started near the mine. Police go to investigate and discover Shigeru above ground walking on the rubble from the cave in. Shigeru is took back to the hospital but has no memory of who he is or any of the events that have happened over the last few days. Strange UFOs begin appearing across the world moving at incredible speeds and causing destruction across the world but no one is able to identify what it is that is flying so fast at such high altitudes. The town also as received new that the volcano over looking them and the mine is now active. Their is fear across the world, the UFOs are flying so fast that they create a sonic boom that levels cities. Shigeru is still at home with no memory when his girlfriend hands him a birds nest she found out side with 2 eggs in it. One of the eggs begins to hatch and Shigeru starts to remember everything. When the mine caved in we discover that Shigeru feel into a hive of those insects that we discover from the scientist are prehistoric insects known as Meganulon. While in the hive Shigeru discovers a massive egg. The egg begins to hatch and out comes Rodan. Rodan then proceeds to eat every Meganulon in the hive. Shigeru goes to the police and tells them what he witnessed they begin to suspect that Rodan is the UFO that has been terrorizing the world. Shigeru takes the police and the army back to where he witnessed the egg hatch, when they arrive there is no sign of the egg or any Meganulon. After looking further into the cave they find a fragment of the egg shell. 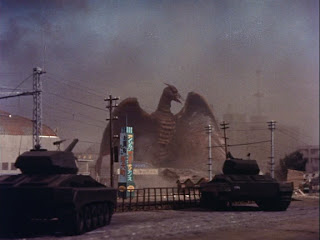 The scientist suspect that the Rodan has a home somewhere very close to the cave where it returns. The army sends a search party and they discover Rodan in a large cave on the side of the massive cave in. The army calls in tanks and jets to start bombing the cave and dispose of the Rodan but the Rodan is awake and aware of what is going on. The Rodan rises from the cave and quickly takes off and begins flying away. The army begins to pursue when a second Rodan rises from the cave and takes off after the first. The two Rodans go on a warpath after they were attacked by the army and level city after becoming an unstoppable force. The army goes all out to try and stop them but fail miserably the two Rodans finally cause enough destruction and devour enough food they stop attacking the city. The Rodans are not seen for weeks following the massive amount of destruction that was done world wide. The scientist suspect that the Rodan are hibernating after eating countless humans, and Meganulon. The army then sets out to destroy the mountains around the Rodans cave to bury them back underground. The scientist urge against it saying that the volcano is to active and the explosions will set it off but the military ignore. The attack commences the Rodans are sleeping unaware of the attack the mountain gets pummeled with explosives. The volcano then erupts and rivers of lava begin to flow quickly across the landscape. The Rodan awake and but to late one has already inhaled to many fumes from the volcano and attempts to fly away but crashes into a river of lava and begins to burn alive the second also distorted from the volcanic fumes gives up and joins its the other Rodan and dies. The movie draws to a close and with the burning Rodan and rivers of lava. 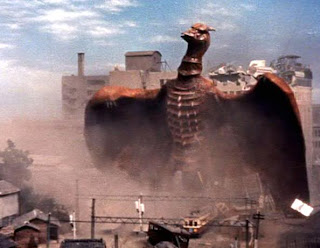 Rodan is one of the most incredible Kaiju films to focus on one Kaiju, yes the movie featured Meganulon but the Meganulon were not standard Kaiju size they were more like bear sized insects they won't be knocking down any buildings and plus in the end they just turned out to be a food supply for Rodan. I am very surprised that Rodan did not go on to have a sequel, yes Rodan appears in a ton of Godzilla movies but it never the central focus of the movies. When Rodan was released in the United States it was a the first film of its kind to receive such a massive TV campaign. Rodan really is one of my favorite Kaiju movies and Rodan is also one of my favorite Kaiju's. If the humans did not attack Rodan while hibernating Rodan would have ultimately gone on to conquer the world. The two Rodans were an unstoppable force and in my opinion the team of the two is probably the most devastating duo I have ever seen in a Kaiju film. After seeing this movie you will stop and wonder how different the Godzilla and Kaiju universe would be if their were still two Rodans appearing in the movies. If their were two Rodans Ghidorah would not have survived past the Ghidorah, The Three-Headed Monster film. I am really hoping to see Rodan featured in the 2014 Godzilla film along with Anguirus. So check out this film and if you order it on Amazon it comes a double feature with War of The Gargantuas on the second disc, the Rodan disc also include a Godzilla documentary that runs a little over an hour so the set is really like a triple feature. This film is very well worth it for any kaiju fan so go get it as it is in my opinion one of the top Kaiju movies ever.
Posted by Whats The Goods? at 3:24 PM