The Plot:
This movie follows a young boy with a big imagination named Ichiro. The movie starts off with Ichiro walking home from school with his friend Sachiko. While walking home Ichiro and Sachiko encounter a bully named Sancho. Sancho and his gang of bullies harass Ichiro and Sachiko. Ichiro heads home where he spends most of his time by himself since his parents are always working late. Ichiro is a lonely child so he takes out his radio and tries to contact Monster Island. Ichiro falls asleep and begins dreaming he is on a plane to Monster Island. Ichiro arrives on the Island he wanders around the Island and sees many Kaiju such as Anguirus, Gorosaurus, and Manda. Ichiro then finds Godzilla fighting three Kamacuras. Godzilla quickly defeats the Kamacuras but one of the remaining Kamacuras strays off and spots Ichiro. Ichiro runs away from it but falls down a deep tunnel, while Ichiro tries to climb out a rope is lowered down into the tunnel Ichiro grabs on and gets pulled up. Ichiro discovers it was Minilla(the son of Godzilla) that pulled him up. Minilla can talk and is just a little taller than Ichiro. Minilla reveals to Ichiro that he has a bully himself a monster named Gabara. Ichiro is then woken up by the toy maker that lives in the appartment bellow him, the toy maker informs Ichiro that his mother is working late and the Ichiro will have to be alone for the rest of the night.

Ichiro upset and alone goes out to play and encounters Sachiko and his bullies again he runs away into an abandoned factory. While wandering the factory Ichiro discovers a tube for his radio then he spots a wallet on the floor with a drivers licence. Ichiro heads home but we, then discover that upstairs in the factory two robbers were hidding upstairs when Ichiro came in the factory and one of them dropped their wallet down a hole in the floor which turned out to be the wallet Ichiro found. Now the two robbers set out to find Ichiro because they don't want him telling anyone that he found the wallet with the robbers licence in the factory. 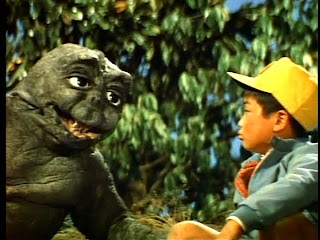 Ichiro returns home puts his new tube in the radio and begins to contact Monster Island again he falls back asleep and continues just where he was before he woke up before with Minilla. Godzilla then starts fighting Kumonga, Minilla attempts to help by he has still not mastered his radiation breath, he hits Kumonga with it but Kumonga is not phased by it. Godzilla takes over the fight and Minilla retreats back to Ichiro, the two then cheer on Godzilla from the sidelines. Godzilla makes quick work of Kumonga but shortly after Ebirah rises from the sea and Godzilla jumps in to fight Ebirah. Once again Godzilla is successful in battle and returns to shore as he returns to land he is attacked by a few waves of fighter jets. Gabara then appears and Minilla then goes to fight Gabara. When he goes to fight Gabara, Minilla increases his size from the size of a human child to the size of a giant Kiaju child. Minilla is still smaller than Gabara and puts up a very weak fight and ends up retreating. Godzilla then shows Minilla how to fight but Gabara starts chasing Ichiro. Ichiro runs into the jungle and hides but is grabbed by a Maneater plant he wakes up and he is being carried away by the robbers who have finally found him asleep and off guard.

The robbers bring Ichiro back to the factory and tie him up while in the chair tied up Ichiro starts calling for Minilla's help. Ichiro falls asleep and returns to monster Island to witness Minilla battling Gabara once again. Ichiro comes up with a plan to help Minilla defeat Gabara. They lure Gabara onto a seesaw like log in the woods and Minilla jumps off a mountain and catapults Gabara through the sky. Minilla runs to Godzilla to celebrate his victory but then Gabara attacks Godzilla. Godzilla makes short work of Gabara who then runs away in fear. Ichiro then wakes up with new courage and manages to escape the factory and runs out of the factory to discover the toy maker has found his car stolen in front of the factory and the police are their to arrest the robbers. The Ichiro the next day stands up to Sachiko and his gang and gains their respect they then become friends and the movie ends.

This is not your typical Kaiju monster movie this is something very different, this movie was intended for children this was the first Godzilla ever made that was aimed primarily towards kids. This movie has a very short run time of only 69 minutes. Many of the scenes in this movie involving Godzilla were scenes taken from other movie and cut into this one, such as the Kumonga fight, the Ebirah fight, and the fight with the Kamacarus. The only scene in the movie that involved Godzilla that was not from another movie was the fight with Gabara. Most of Minilla's scenes were original scenes that were not cut from other movies. The talking Minilla and size changing Minilla is also unique to this movie in all other movies Minilla appears in larger form. Something that I found funny in this movie was that even though it was a kids movie, when they showed adults, almost every adult was shown smoking cigarettes. Yes I know it was the 60's and thing are different today but I still think it was funny that something intended for children involved a lot of smoking. Also another thing that is strange about this being a kids film is that it involves a child getting kidnapped which I think would come off as scary for children, but I guess that's just me. Although this is the shortest movie, it is a movie that is very special to me, this movie was the first Godzilla movie I ever saw as a child when I was only 4 years old. Since the day I saw this movie I have developed a massive love for Godzilla and Kaiju movies. This movie although a little corny and intended for kids is still to this day one of my favorites. I suggest that if you want to introduce your kids to Godzilla you choose this movie to show them first it has a great message in the end and will definitely entertain them as I know it entertained me. I used to watch this movie literally almost every day as a kid.