What Could Have Been: The Volcano Monsters[1957] 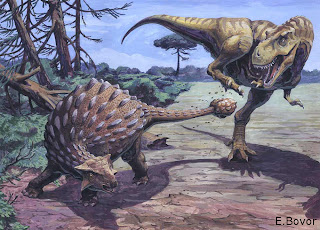 This will be a new feature that you will be seeing regularly on GodzillaIsland.com. I will be discussing movies from Toho's "Lost Projects" list. Many of the films on this list are early scripts of movies that were re-written and latter became movies that all Kaiju fans have grown to love, but some movies on this list have never had the opportunity to be re-written and make it to screen. I will be discussing all of the movies from this list and the articles will be in the same format as my reviews I will tell the plot of the movie first and then provide my thoughts on what could have been. First let us start with The Volcano Monsters which was later turned into Godzilla Raids Again.

The Plot:
The movie would follow an American paleontologist named Roy who discovers a preserved Ankylosaurus and a Tyrannosaurus Rex. The two monsters are discovered encased in magma and it looks as though the two beast died fighting while being encased in magma. Roy has the two preserved dinosaurs shipped back to San Francisco. Roy than attends a conference in Tokyo to discuss his discovery. While on the ship it is discovered that the two dinosaurs are actually still alive. When the dinosaurs arrive in San Francisco they break free and begin fighting. When Roy gets word of this he suffers a stroke from the shock and is hospitalized his assistant Marge begs Roy to kill the Dinosaurs but the his Doctor advises against the idea as Roy has his heart set on receiving the Nobel Prize and if the Dinosaurs die he will loses his chances of winning and might die from depression. The Tyrannosaurus then kills the Ankylosaurus while fighting in San Francisco. Marge begins working on a formula to replicate the gases of the Volcano that froze and preserved the dinosaurs. The Tyrannosaurus makes it's way to the university where Marge is and destroys the University. The military arrives and begins shooting the Tyrannosaurus but the weapons have no affect. The Tyrannosaurus then retreats into the sea. The Tyrannosaurs is then pursued by the Navy and Air force but no weapons have an affect. It is discovered that the Tyrannosaurus is heading to an Island in the polar region to lay eggs the army considers nuking it but realize that if they kill the final dinosaur Roy might die in his fragile state. So the army decides to blow up the ice around the cave the dinosaur is hiding in so that the ice will freeze and preserve the Tyrannosaurus. The plan is successful and Roy can now study the frozen creature when ever he pleases. The movie then ends back at the cave where the two dinosaurs were first discovered and a claw reaches out of the cave.

My Thoughts:
First thing I can think is can you believe this ridiculous movie would have stopped a sequel of Godzilla being made? Can you imagine if this movie was not re-written to be about Godzilla instead? We might not have ever been introduced to one of my favorite Kaiju Anguirus. The story to this movie does not start out that bad but when it gets to the point where Roy has a stroke and that he can die from depression...that is where it gets ridiculous. A whole city is being destroyed, people are dying in the streets, but this guy dying in a hospital bed because he will not win the Nobel prize if the dinosaurs are killed is more important? Really the people in this movie need to get their priorities straight, especially if this takes place in America, if this scenario happened in real life this is how it would go down everyone would say screw Roy let the selfish depressed guy die and kill the dinosaurs to save lives and the city. Any way I am glad that this movie got completely made over and turned into one of the most iconic Godzilla movies "Godzilla Raids Again". Thanks for reading and keep an eye out for a Godzilla Raids Again review.