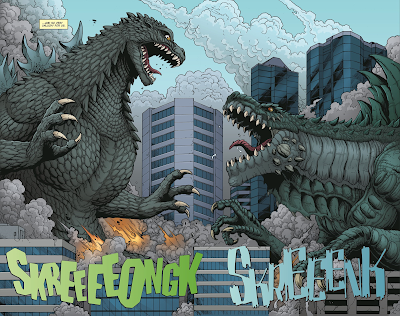 Godzilla Rulers of Earth #2 has been out a week now and here is my review. The book continues where we left of last time Godzilla and Zilla are battling in Hawaii. We learn about the human characters a little more we learn about a soldier that goes by the name Chavez. Chavez lost his family in a Godzilla attack, and took down three Kaiju piloting an unnamed Giant Robot with a little girl as his co-pilot. The only clue we can get on the robot is seen on his report but we do not see the full name it says "piloting O.O.C. Mecha.." it cuts off at the "Mecha" we can only assume Mechagodzilla. We are also introduced to Professor Kenji a Kaiju expert that is assembling a team of  Kaiju experts. Professor Kenji recruits Lucy Casprell the female character from the previous issue. We do not get a great explanation on what the team will be doing but I am sure it will be something interesting.

﻿
The battle between Godzilla and Zilla rages on in Hawaii. Godzilla is pretty much dominating Zilla the whole time only having slight troubles from Zilla. Just as Godzilla is about to finish of Zilla the army begins to attack Godzilla. Zilla then retreats as Godzilla begins to get attacked by the army and Godzilla heads into another direction instead of pursuing Zilla. Chavez who was out side during the whole battle is confused as to why Godzilla did not chase down Godzilla. During the battle Zilla burrowed underground and rose out of the ground just a few feet away from Chavez. Chavez saw something fall of Godzilla at the end we see what looks like a small piece of what I assume is a Kamacarus claw. The book then ends with the aliens in space that are controlling Gigan receiving a message from a "Devonian Spokesman" which we can assume is an ally alien race to them the message is that their is a breach and something has escaped.

As I said in the previous comic book review the artwork in these comics are incredible this one did not really have any Easter eggs in it besides the "Mecha" thing in Chavez's file. The battle scenes are great and the story looks like it will be shaping up in to and epic story. Please support this comic and keep it going by ordering here.