This is a new feature where I will be discussing the Kaiju War Chronicles from tohokingdom.com. Toho Kingdom is one of my favorite websites for Kaiju  information. The Kaiju War Chronicles are fan fiction stories that revolve around fights between famous Kaiju. This article is covering King Kong Vs. SpaceGodzilla by Christian Salabert story located here. 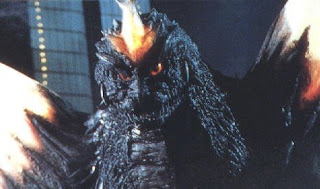 This fight was pretty awesome it is about SpaceGodzilla trying to steal the berry juice from the village on Faro Island but King Kong attempts to fight him off. The fight is pretty one sided Space Godzilla kicks Kong's ass just like Godzilla did. That's right I said it Godzilla kicked Kong's ass I don't care what they say the out come of King Kong vs Godzilla is to me that match always went to Godzilla. Godzilla beat Kong in the basically all the fight through out the movie the end fight we don't know the outcome maybe Godzilla just swam away at the end. Back to King Kong vs SpaceGodzilla, now SpaceGodzilla dominated the whole fight pretty much Kong didn't even make a mark SpaceGodzilla just bombarded Kong with his Corona Beam, and then took to the sky and hit Kong with all his Crystals. Kong looked pathetic in this fight and never stood a chance even worse he got humiliated on his home turf of Faro Island in front of all the natives that worship him as a God...Where is their God now? In the end after getting bombarded by constant Corona Beam, Crystals and then buried by a mountain Kong looked like a massive weakling. SpaceGodzilla humiliated Faro Islands God, destroyed their berry juice supply and just left the small native village in ruins.

The article ends with the visitors exploring Faro Island saying that they are leaving with what is left of Kong which leaves the reader to wonder if they are going to try to save Kong or possibly make him part cyborg. I thought it would of been interesting if Oodako joined in on the fight as well for the berry juice but maybe Oodako figured after his first time losing to Kong he better stay out of it with SpaceGodzilla in the mix. I really enjoyed how well the story was written and if you have not read any of the Kaiju War Chronicles give them a look because there are a lot of matches that sound really interesting and I am just getting into them myself so be sure to look out for a lot more Kaiju War Chronicles Reviews! I wish their were more pictures that went with these matches it would be awesome if the Toho Kingdom crew managed to convert these into comics or something. Until next time thanks for reading!
Posted by Whats The Goods? at 4:09 PM