Movie Review: Godzilla vs Hedorah(Godzilla vs. the Smog Monster)[1969] 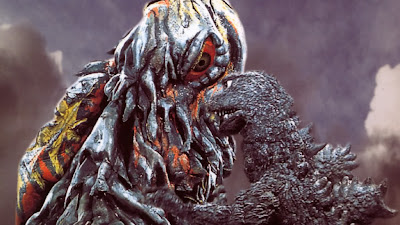 The Plot:
The movie opens with a boy named Ken playing with his Godzilla toy, when a fisherman arrives at his house to see Ken's father Dr. Yano. The fisherman shows a strange dead fish that he found. The fish is black and resembles a tadpole, but it is not a tadpole. We then see on Dr. Yano's T.V. a monster has sunk an oil tanker ,and several other ships. Dr. Yano and Ken then head down to the bay where the fisherman found the strange fish. Dr. Yano goes in the bay with scuba gear and Ken stays on shore as a look out for him. While Dr. Yano is underwater Ken spots Hedorah the monster that attacked the ships. Hedorah begins swimming to shore towards Ken. Hedorah leaps out of the water towards Ken, but he leaps over Ken and gets cut by Ken's knife. Hedorah returns to the ocean where Dr. Yano is still investigating. Ken standing on shore begins to call out for his father to come back to shore, but Dr. Yano is to deep and unaware of the events that had just took place on the surfave. Dr. Yano spots Hedorah, but it is to late for him, and he gets attacked. Ken stands on the shore continuing to call for his father, and begging for his dad to come back, the scene ends leaving all viewers thinking that young Ken was left standing on shore while his dad was killed at the bottom of the ocean.
The next scene opens and to our relief we learn that Dr. Yano did some how survive attack (never really get an explanation). Dr. Yano has been mutilated half of his body has been turned a dark gray color. Reporters are at his house and Dr. Yano insist that they get pictures of his now disfigured face so that the public knows the dangers of Hedorah. Dr. Yano begins to experiment on the dead fish that the fisherman had brought him and discovers that it has hardened like a rock he breaks a piece of it off, then drops it in a test tube with water he discovers that the little piece comes back to life in the
water as a little tadpole like creature. We learn that when there are multiples of these creatures they join together to form one larger creature. It is then discovered that these creatures are small Hedorah and that they are the result of pollution and liter on earth. 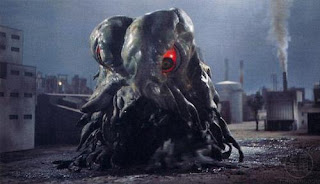 Ken begins having dreams about Godzilla fighting the worlds pollution and insist that Godzilla will come to save them from Hedorah and the pollution. Shortly after Ken's dream Hedorah comes to shore and has grown Hedorah begins feeding on pollution from smoke stacks in Japans industrial area. Hedorah begins to grow larger and larger as he feeds. Godzilla drawn by Hedorah's horrible stench comes to shore and begins battling Hedorah chunks of Hedorah start flying all over the place splattering everywhere and killing people as Godzilla attempts to defeat Hedorah. The chunks become their own living entity and move around picking up more garbage and pollution getting larger. The fight goes on between Godzilla and Hedorah, Godzilla easily beats the small Hedorah. Hedorah retreats and all the pieces of Hedorah that were lost in the battle return to Hedorah.

Hedorah soon returns as a flying form (which is in my opinion one of the most deadly forms he has),
Hedorah flies over Japan expelling poisonous gases killing thousand instantly. Those that fall to Hedorah's poisonous gas collapse and are reduced to just a pile of bones in seconds. Godzilla faces the flying form and this time Godzilla gets hurt he gets hit in the eye by Hedorah's sludge and it gets injured just like Dr. Yano's face.

My Thoughts:
This movie is sort of confusing on one hand it seems like it is suppose to focus on a young audience of children by having one of the main actors be a young little boy, but on the other hand there is a lot more death shown in this movie than your average Godzilla movie we see people turned to bones, Ken's dad gets deformed, and we even have the belief that he was killed at one point leaving a crying child on shore. This movie seems just a little too graphic for a children's movie if anything it might be a light horror. This movie always gets mixed reviews as a Godzilla fan I enjoyed but I can see why it would get hate. The first thing that is just plane insane and I think is just as crazy as the famous dropkick is Godzilla flying it was just crazy and did not really need to happen Godzilla could of just shot Hedorah out of the sky. The other things that mad it kind of annoying was the few music
sequences with the song Save The Earth the scenes were kind of trippy and I did not really get them, one of the scenes involved a bar and the guy was hallucinating that everyone in the bar had fish as heads kind of whacky. Something interesting that I read was that the actor that was wearing the Hedorah costume came down with appendicitis while filming and was actually operated on while he was wearing the costume because it took to long to take the costume off, I wish there were pictures of that can you imagine seeing a Hedorah on the operation table. The writer of this movie attempted to make a sequel several times, he even is involved with the new 2014 Godzilla movie and attempted to make it a movie about Hedorah again but as far as I know that was shot down also. Hedorah only appeared again briefly in Godzilla Final Wars. This movie was pretty good if you are a Kaiju and Godzilla fan so as I always say "check it out"  I have yet to see a Kaiju movie that is so bad that I would tell anyone not to watch it from what I heard Death Kappa is that type of Kaiju movie but I will be watching Death Kappa once I get my hands on it no matter what the reviews say and I will review it myself for all you readers and let you know if you should save your money or not.

I will be covering the Hedorah sequels that never happened in a "What Could Have Been" article sometime in the next few weeks, I will also be reviewing Destroy All Monsters, Gamera(that's right Gamera be excited!), and Gamera vs Barugon. I also just ordered both the Hanna-Barbera Godzilla T.V. series and the Sony Series that followed Zilla, so I will also be reviewing all episodes of both series individually as well. I would like to start reviewing the Godzilla novels also, I own two of them and read both a very long time ago so I will need to start collecting those and reading those, but don't expect the book reviews anytime soon as  I am a slow reader and I have to finish a few books before I get to the Godzilla books. If you would like me to review anything else please comment and ask I will gladly review anything Kaiju. Here is the Save The Earth opening this is not as bad as the actual bar scene where they sing but the song it self is kind of annoying."