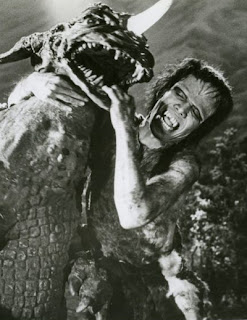 The Plot:
The movie opens in Nazi Germany during World War 2 a military officer enters a Laboratory and orders the seizure of the Frankenstein Monster Heart. The heart is then transported and handed over the Nazi's Japanese allies. The heart arrives in Hiroshima but is then lost in the dropping of the Nuclear bomb.

The film then jumps 15 years later where a boy is reported running around Hiroshima eating and killing small animals. The towns people are outraged and chase him to a cave, Dr. Bowen and his scientist insist on helping the boy but the down people are outraged that he has been killing their pets and live stock. They take the boy back to the hospital and discover that he is Caucasian not Japanese ,and that he is irradiated from the nuclear bombing radiation but he is somehow building a resistance to it instead of being hurt by it.

The film then cuts to former Navy Officer Kuwai who was on the Japanese submarine that transported the Frankenstein heart. Kuwai is working on an oil rig when an earthquake occurs he runs to stable ground and turns around to see a monster in the fissure of the earthquake he also sees a strange glowing light come from it but then the monster retreats into the ground.

Back at the hospital Dr. Bowen has discovered that the boy is growing at an incredibly rapid speed and that the boy's strength is extremely great. As a safety precaution they decide to lock the giant of a boy in a cage in the basement of the hospital. Kuwai arrives after hearing the story of the boy and tells Dr. Bowen that he believes the boy may have grown from the Frankenstein heart he transported during the war. Dr. Bowen sends his assistant Kuwaji to Germany to find Dr. Riesendorf who is the doctor that the heart was taken from at the beginning of the movie. Dr. Risendorf says that the heart of Frankenstein never dies due to it's protein intake.  Dr. Risendorf tells Kuwaji that he should cut a part of the boys body off and if the part grows back he is indeed the Frankenstein Monster. Kuwaji returns and tells Dr. Bowen that they need to cut the boy to see if he is the Frankenstein Monster but Dr. Bowens assistant Sueko objects worrying that the they might permanently maim the boy. Dr. Kuwaji goes to the basement to try and cut the boy but the media arrives asking to take pictures. The flashes anger the now Giant boy and he then breaks free of his chains by ripping his hand off he escapes and kills several people in the process. The boy is then confirmed to be the Frankenstein monster after his hand grows back. 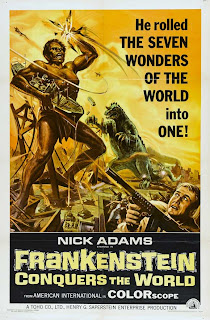 Frankenstein escapes up into the mountains and we see him play like a boy in the forest throwing things around and trying to capture animals. Meanwhile Baragon the monster that Kuwai had seen at the oil rig rises from the ground at night and destroys a whole village and eats everyone in it. Everyone begins to place the blame on Frankenstein because unaware of the existence Baragon. Kuwai informs Dr. Bowen that it may not be Frankenstein but Baragon the monster that he has seen come from underground at the oil rig. Kuwai and Dr. Bowen try to convince the authorities that Frankenstein is innocent but they have no proof of Baragon's existence so the military and police continue to hunt Frankenstein.

Dr. Bowen, Kuwaji, and Sueko set out to find Frankenstein. Uknown to Dr. Bowen and Sueko, Kuwaji is secretly planning on killing Frankenstein with gas grenades. When Kuwaji arrives in the supposed cave Kuwaji discovers Baragon instead. Baragon begins his rampage and is about to attack Sueko when Frankenstein appears and the battle begins. The fight between the two monsters rages on and a massive forest fire starts surrounding the two monsters. Baragon had dug so much underground and so many trees has burned away that the roots no longer were able to keep the ground stable so the two monsters are then sucked into the earth and the movie ends. 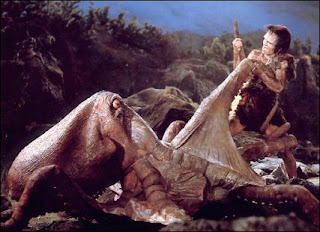 This is really a good movie I really enjoyed it this was my first time ever seeing this Kaiju flick and I always wanted to see it. I was not disappointed the battle between Frankenstein and Baragon goes on for a pretty long time and is actually one of the most interesting monster fights I have ever seen. The ending was interesting because it did leave it open for a sequel which we all know never happened but the script for the sequel was changed and became The War of The Gargantuas. I can see how this movie totally related to The War of The Gargantuas and I think the two match up pretty well to each other I think I actually enjoyed Frankenstein a little more...I don't know they are both so good. The one thing that I do like better in The War of The Gargantuas is how they looked compared to the Frankenstein monster in this movie. Originally when the film was being promoted it was believed originally by most fans that Frankenstein would fight a giant octopus Oodako from King Kong vs Godzilla but the scene never made it to the big screen, but it was indeed filmed. The movie was co-produced with an American studio that really liked the fight scene between Kong and Oodako that they wanted to see a battle with Oodako in this film, ultimately Ishiro Honda said the scene did not fit into the movie so it was cut. A fight did take place in  The War of The Gargantuas between Gaira and Oodako at the beginning of the movie so in away we got to sort of see Frankenstein fight Oodako. It would have been cool if they did treat  The War of The Gargantuas as a sequel instead of making  be its own thing but what can you do? both movies are great and I suggest you watch them! Until next keep an eye out for more reviews I think I will be doing Son of Godzilla next and Issue #2 of Godzilla: Rulers of Earth has just shipped out today so I should have a review for that once I read it. While talking about comic books I would like to remind you all that there will be only 3 days left to support World War Kaiju and try to get it to $25K so it can be an even bigger story the funding has already reached its goal but if they hit $25K they will make it a longer story so please support it and thank you for reading!
Posted by Whats The Goods? at 7:02 PM