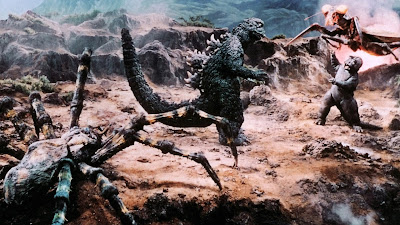 The Plot:
The movie opens with a crew flying over the ocean and their flight equipment is receiving some sort of interference they say resembles a brain wave, but they can't figure out where it is from, they then Godzilla in the ocean and they change course. They say that the interference is not Godzilla and the navigator gets out a map to figure out where the interference is coming from they discover it is coming from a strange Island called Sollgel Island. 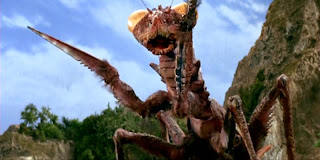 We then move to Sollgel Island where we discover a team of scientist are working on a weather control device that will allow them to change the weather of any environment in the world, eventually turning those environments into areas for farm land and livable areas, so that in the future when population booms there will not be a shortage of food and living area due to over population. A reporter then arrives and wants to do a news piece on the experiment, the scientist are very reluctant and insist he leave at first but in the end they allow him to stay as long as he helps with the work around the facility.

A few days pass and it is revealed that their are large man sized insects roaming the island the reporter dubs them Gimantis(only in the English version they receive this name they are actually Kamacuras so that is what I will be calling them in this article). While roaming the Island the reporter goes to the shore and sees a woman swimming around in the ocean but he is then tripped up and when he looks back she is gone. The reporter returns back to the base and tells everyone of the girl but they insist that their is no one on the Island besides them. The scientist commence the launching of their weather experiment and launch a weather balloon but shortly into the experiment their equipment is interrupted by the same signal that was interfering with the plane at the beginning of the movie. The weather balloon detonates to early at a low altitude and sets of a radiation storm on the island that last days. 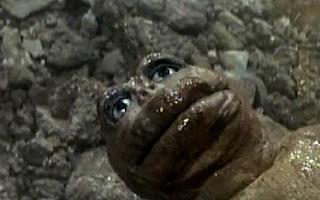 When the storm finally clears the scientist and reporter discover that the once man sized Kamacuras have now grown to massive Kaiju size Kamacuras taller than their buildings as we all recognize them to be. While investigating the Kamacuras the reporter finds a group of them attacking a mountain where the jamming signal seems to be seems to have originated from we soon discover that under the mountain is a giant egg. The Kamacuras begin smashing the egg and out hatches Minilla (baby Godzilla) the Kamacuras begin beating the Baby Godzilla when suddenly Godzilla arrives on the Island to rescue his offspring. In the process of rushing to Minilla's aide Godzilla unintentionally destroys the scientist base. Godzilla battles the three Kamacarus that were attacking Minilla. Godzilla manages to kill two of the Kamacuras and one escapes. Shortly after this takes place the reporter discovers the girl once again on the Island this time she is playing with Minilla and feeding him fruits from the Island trees. We learn that the girls name is Reiko. The reporter and scientist soon learn that she was born on the Island when here father and mother came to research fossils on the island but both her parents had fallen ill with a fever and died. Reiko survived on the Island for years all by herself in a cave and warns everyone of the slumbering Spiga(only in the English version of this movie is this kaiju referred to that name the actual name of this kaiju is Kumonga) the giant spider. 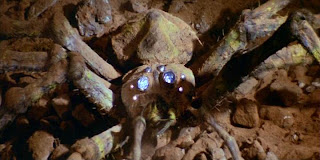 Reiko and the reporter are out exploring the Island when they get attacked by the surviving Kamacuras. Minilla has grown a liking to Reiko rushes to their aid. Minilla puts up a very week fight as he is still a young inexperienced fighter. During the fight they inadvertently awaken the slumbering Kumonga. Kumonga covers Minilla and Kamacuras in web Reiko and the reporter return to her cave for safety where all the scientist are now working on the weather machine. As Kumonga begins to feed on Kamacuras Godzilla arrives and discovers his son wrapped in web. Godzilla and Kumonga begin fighting. Minilla breaks free of the web and he aids Godzilla in fighting Kumonga. They defeat Kumonga by both using their Atomic breath on Kumonga. The scientist once again set of the weather machine this time successfully a blizzard begins to cover the Tropical Island in snow. Godzilla and Minilla begin to hibernate, and a U.S. Submarine arrives to the Island to pick up the scientist. Godzilla and Minilla will hibernate until the Island is once again tropical. 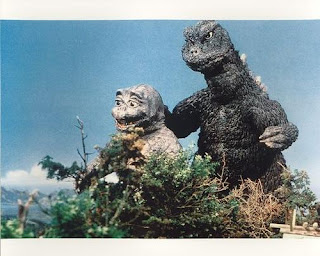 My Thoughts:This movie is the first movie where Godzilla's son Minilla appears in the Showa series. Minilla also appears in Destroy All Monsters, All Monsters Attack(Godzilla's Revenge), and Godzilla Vs. Gigan. I really enjoyed this movie I wish they had a few more movies that showed Godzilla and other Kaiju's in their natural Island environments. Movies like this and Godzilla's Revenge I always enjoyed because of the Island setting. One thing that I can never get over is how Minilla looks to me he just never looks right, especially in the face . Minilla was always one of my favorite characters in the Godzilla movies when I was a kid. What I like about movies like these is that we see why Godzilla is "King of the Monsters " he dominates every monster on the Island. This movie is pretty straight forward it shows the origin of Minilla, Kamacarus, and Kumonga. I highly recommend this movie if you can get your hands on it for a reasonable price so be sure to pick it up if you can. I will be reviewing Issue #2 of Godzilla Rulers of Earth, Godzilla Vs. Hedorah, and Destroy All Monsters. I will also be covering another what could have been movie, and do a new feature covering the Kaiju War Chronicles so keep an eye out for those articles and thanks for reading!