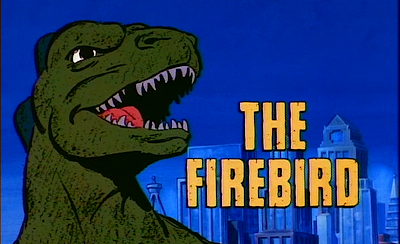 This is a new piece that I will be featuring on Godzilla Island. I will be discussing episodes of Godzilla Animated series from the '70s, as well as episodes from the later series from the '90s. This article is about episode 1 titled "The Firebird" from the '70s series. The '70s series follows the crew of the Calico a research ship. The Calico's crew members are Captain Carl Majors, Dr. Quinn Darien, her nephew Pete, and her research assistant Brock. The crew also has Godzooky, who is Godzilla's goofy cousin, that is much smaller than him ,and has little wing flaps under his arms. Godzooky to me is like the Scooby-Doo of this gang, he can't talk but he is Pete's best friend. Captain Carl has a device that calls the final member of the Calico's team Godzilla. Now that I have gave you a little background of the show lets get into the first episode "The Firebird".

The Plot:
The episode starts with two geologist doing some research on a volcanic island, when an earthquake begins ,and sets the islands volcano off. The geologist run to the dock to get on their boat, but they are to late the earthquake has caused massive waves in the ocean ,and their boat along with the dock have been destroyed they are now trapped on the island. The geologist run back to their lab and send out a distress signal calling for help. The show then cuts to the volcano, and we see a massive bird like monster rise out of the erupting volcano, then go back down into the volcano.

We now go to the Calico sailing out at sea ,and Pete is yelling at Godzooky for hiding out on the back of the boat causing it to shake to much. Godzooky gets on the ship after Pete yells at him ,and they both begin to walk towards the front of the ship to see what Carl, and everyone else is up. At the front of the ship Carl, Dr. Quinn, and Brock are talking about how it has been a bumpy ride with Godzooky on board. Just as Godzooky and Pete arrive to the bridge of the ship where everyone else is, the boat begins to rock a lot more but this time it is not Godzooky. Brock spots out on the horizon a massive tidal wave heading straight for the Calico ,and their is no way that the ship can survive or navigate around it, Captain Carl has no choice but to call Godzilla. The Carl pushes the button on the remote ,and we see Godzilla for the first time rise up out of the water roaring. Godzilla sees the tidal wave ,and quickly picks the Calico up with one hand. The tidal wave crashes into Godzilla, but like a mountain in the sea Godzilla just stands in place unmoved by the massive wave. Godzilla places the Calico back in the ocean ,and the Calico crew celebrates.The crew returns back to what they were doing ,when they discover the distress call from the volcanic island. Captain Carl decides to rush to the aid of the distress call and Godzooky takes flight allowing the ship to move faster.

The Calico arrives to the very active volcanic island ,and the crew spots the two geologist on the shore. Captain Carl along with Brock take the hovercraft out to pick up the two geologist and bring them back to the ship. The geologist are successfully rescued from the lava covered island and brought back to the ship. On the ship Dr. Quinn is talking to the geologist when they inform her that they believe that if their is another earthquake caused by the volcano on the island, that it may cause a chain reaction, resulting in more volcanoes erupting, causing even more devastation such as earthquakes ,and larger tidal waves. Dr. Quinn and Brock set out in the helicopter to investigate this volcanic island further. Dr. Quinn and Brock return to the ship after having discovered an ancient tunnel that they believe will take them to the core of the volcano, where they can figure out why it has all of the sudden become active. ﻿﻿

﻿﻿
The Calico crew and the geologist head to the island to investigate this tunnel. Godzooky and Pete were suppose to stay behind at the ship, but Godzooky wanted to help so he flew away to the island ,and Pete followed him with the helicopter. Pete arrives on the island and follows Godzooky into the cave. While in the cave Godzooky slips and almost falls into the molten lava. Carl, Brock, Dr. Quinn, and the geologist are also navigating the cave in a different tunnel when it collapses behind them. Carl, Brock, Dr. Quinn, and the geologist reach the volcano's core, then discover the
Firebird rising out of the fissure. Everyone now knows that it is the fire bird that is responsible for the volcano's sudden eruptions ,and high activity. Godzooky and Pete spot the others on the opposite side of the volcano so Pete jumps on Godzooky's back then flies across the volcano almost getting attacked by the firebird. The Calico crew, and the geologist flee the volcano and return to the ship.

Captain Carl calls upon Godzilla as his only hope to stop the Firebird from setting off a chain reaction and bringing mass destruction to the world. Godzilla begins fighting with the firebird ,and we discover that besides being able to breath fire, Godzilla can also shoot laser beams from his eyes. The two monsters fight for a little ,and then the Firebird starts to retreat. Brock tracks the Firebird with heat sensors ,and discovers that the Firebird is heading for the artic.

The Firebird arrives in the artic ,and the Calico crew believes the Firebird is going to attempt to lay eggs there, spawning even more Firebirds to bring destruction to the world. Godzilla again begins fighting the Firebird. Godzooky attempts to then join Godzilla in the fight ,but the clumsy Godzooky ends up just getting knocked out by the Firebirds tail. Godzilla picks Godzooky up and places him on top of a mountain. The Firebird ,and Godzilla end up wrestling each other ,and falling in the cold ocean. While fighting underwater the Firebird swims into a cave to hide from Godzilla. Above water the clumsy Godzooky trips on the mountain top causing a large boulder to fall into the ocean and partially block the entrance to the cave. Godzilla sees the boulder blocking the cave and grabs and even bigger one to block the cave and lock the Firebird in their underwater for good. This brings an end to the episode and everyone celebrates Godzilla's victory. 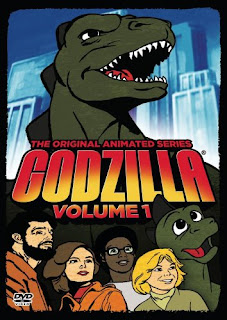 The show I find very enjoyable ,and watching this episode was like watching this show again for the first time. I was born in the late '80s so I was not around when this show was first aired on T.V. but I do remember watching episodes of this show on Boomerang as a kid ,and I really enjoyed them. Yes this show is intended more for kids but I still found joy in this episode. I think any Godzilla fan can watch this T.V. show ,and enjoy it. Some may find the whole idea of Godzooky a little whacky, but hey it is a kids show it is suppose to be whacky. The Firebird in this episode actually had a little resemblance to Rodan in my opinion. I mean both the Firebird and Rodan came from volcano's, both are red,  and like the Fire Rodan from the Heisei series the Firebird can shoot a heat beam. It is pretty obvious that they intended this Firebird to resemble Rodan. I really enjoyed this episode ,and the story was really interesting I watched this episode on DVD.

Season is available online on DVD in three volumes I do not believe the complete series is available but between the 3 volumes all 13 episodes of the first season are available on DVD ,and they are also viewable on Amazon Prime, Netflix, and Hulu. I would say for the price of the DVDs it is very well worth it, the third volume is the most expensive usually running for around $15 ,but the other Two you can easily get for about $5 each. I hope that we will see Season 2 of this series on DVD some time soon. I have contacted Classic Media via E-mail in an attempt to see if I can get an answer on the release of season 2 on DVD, I will let you know what response I get from them, hopefully something good.
Posted by Whats The Goods? at 12:11 PM