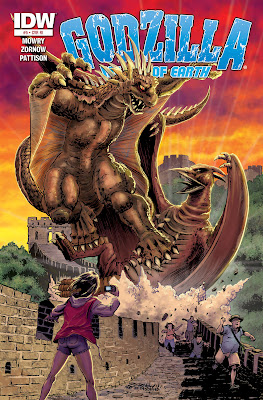 This issue starts off right where issue #4 left off. Varan is chasing the science team, but then Rodan appears ,and then begins fighting with Varan. The science team gets brought to a bunker for safety but the shaking from the battle forces them to flee deeper into the bunker. During this battle one of the students falls ,and wakes up alone. The student wanders around the base ,and discovers Gaira in some sort of holding tank. The Chinese commander on base warns the student that she should not have stumbled onto this secret ,and to keep quiet about it. As soon as the commander returns the student to the professor she informs the professor that the Chinese have Gaira captive. The professor is outraged and demands an answer for the Chinese actions.

The Chinese commander claims they did it for safety to keep the monster from attacking innocent civilians ,and that they want to use it as a means of defense as well. The Chinese commander tells the professor how they lured it with a radio frequency. He says that Rodan had been drawn to it ,and now recently Varan. The professor outraged screams at the commander for attempting to use a Kaiju as a weapon. 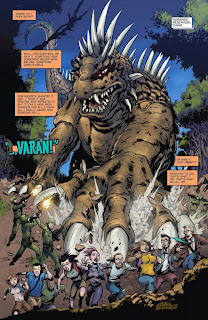 Meanwhile outside the base the battle between Varan ,and Rodan is raging on. Suddenly during this whole commotion between the professor ,and the Chinese commander Varan's head burst through the ceiling ,and everyone begins to evacuate the base. Rodan had picked up Varan , and Slammed him so hard onto the bunker that it had penetrated all the way down to the lower levels. The student runs to Gaira ,and frees him as everyone is evacuating the base. Meanwhile Rodan has retreated, but Varan continues his strike on the base. Suddenly Gaira explodes out from underground ,and begins beating on Varan. This fight is much more brutal than the fight between Rodan ,and Varan. Varan takes flight with Gaira attached to him. While this is happening Sanda appears but stays clear of the fight. Sanda stands back while watching, Gaira and Varan fly off into the Horizon still battling.

We then here a report that Godzilla has appeared in America and is walking through the California desert. 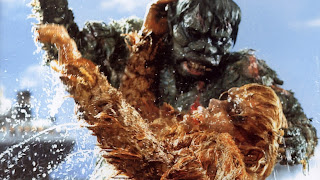 This issue was just pure nonstop action from beginning to end there is constant battle between Kaiju. This so far was probably my favorite issue out of the series yet. I really like that they are pulling other Kaiju from the Toho monster universe ,and not just from the Godzilla universe. We had Gezora from the Space Amoeba last issue, now Gaira ,and Sanda from the War of the Gargantuas. I dream that this series gets made into a movie. I am really hoping after this 2014 release of Legendary's Godzilla movie that Toho gets back in the game ,and starts producing more movies with classic Kaiju like these. I love the Rodan design they used in this issue, it is more of a classic Rodan design that we haven't seen in awhile. Overall the art in these comics have been just brilliant, they are so visually appealing ,and fun to look at. 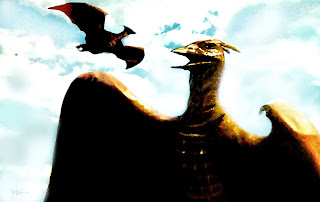 What made me a little confused was Rodan retreating from the fight. I mean the whole time I would say Rodan had the upper hand I am thinking maybe Rodan was not retreating but being drawn or called away by something else. Godzilla is now in the desert where the series first started showing us Gigan battling Kumonga in the first issue. Is Godzilla going to stop Gigan? Maybe Rodan is heading for Gigan as well. We don't know but what we do know is the Gigan, Orga and Moguera are on the cover of next months issues.

Another thing that I found interesting was the use of radio frequencies to draw the monsters this is a very similar thing that was done in the Half-Century War series, as well as the recently reviewed The Return of Godzilla. I also liked how they kept using the word "unbelievable" at the beginning when discussing the whole Varan situation , as you may or may not know Varan first appeared in Varan The Unbelievable, than 2 other times in Destroy All Monsters, and Godzilla: Final Wars. Varan is a monster that I am not to familiar with I never saw Varan The Unbelievable , plus the appearances he made in Final Wars ,and Destroy All Monsters were very short. I do own Varan the Unbelievable so I do plan on watching it soon so I can get to know this Kaiju more. Anyway check out this series if you haven't yet, and keep a look out for more reviews, I just finished watching Godzilla vs Biollante!
Posted by Whats The Goods? at 6:05 PM