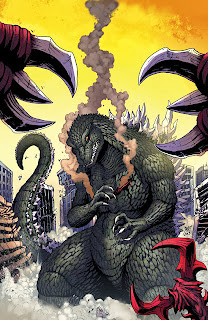 Rulers of Earth Issue #4 starts off with everyone discussing the attack on the aircraft carrier from the previous issue. Early reports on the attack claimed it was Godzilla, but we all know it was Manda , and  Gezora. The defense forces are also now aware that they are dealing with an alien situation as well. We then see Godzilla down on a beach ,and news reporters are claiming he is dead. The reports are that Godzilla came to shore and collapsed. Godzilla wakes up just in time as small Destoroyah begin crawling all over him. Godzilla emits some sort of radiation burst from his body knocking all of the Destoroyah off him. A Giant Destoroyah rises from the ocean ,and the two begin battle. Meanwhile the defense forces is starting to get the idea that Godzilla is actually on their side ,and is trying to battle the other forces leading these attacks by the other Kaiju such as Zilla, Destoroyah, Manda, and Gezora. 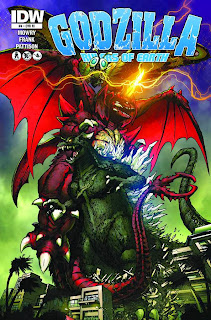 Meanwhile the Kaiju scientist have come to the realization that these attacks may be caused by something else ,and it is here that we learn that this series actually does have a direct relation with the The Half-Century Wars. The scientist bring up how during the Half-Century War first the Kaiju came from land, and then they came from space, now they are all coming from the ocean. They begin to think that maybe this is the third wave of the attacks that has been waiting to strike.

The battle between Godzilla ,and Destoroyah continues. Godzilla seems to be struggling a little but then Mothra arrives ,and joins in the battle. With Mothra distracting Destoroyah , Godzilla uses this opportunity to grab the nuclear reactor he took from the ship wreckage that Manda and Gezora destroyed. Godzilla draws energy from the nuclear reactor. Two Mothra Larva also arrive will this is going on , and now we have a 4 on 1 fight. Destoroyah is quickly dealt with and it is a victory for Godzilla and the Mothra. Unfortunately the adult Mothra was hurt during the battle ,and the two Larva carried it off.

We then return to the scientist, who are now in search a reported Kaiju in China. They spot a Varan rising out of the lake but the military informs them that was not the Kaiju they reported. 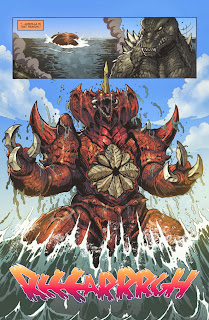 Issue #5 just came out on October 31st ,and from the pictures online we know that the Kaiju that was reported is indeed Rodan. From what I have seen we will be seeing Rodan ,and Varan battling in issue #5. I was hoping my issue #5 would arrive today but unfortunately that did not happen so hopefully Monday I will have receive it. What I am curious to know is which Kaiju will be the one fighting for earth ,and which will be the one fighting for the aliens. I am very excited that they went with a very old school look for Rodan. I am hoping that Rodan will be teaming up with Godzilla, although Varan is a monster that many Kaiju fans have not got see in many films. Like I have said from the beginning of this series the artwork in these comics are stunning. The little Easter eggs ,and references through out them are great, like the reactor Godzilla used in this issue to draw radiation from almost mirrored the scene from The Return of Godzilla (Godzilla 1985). This really is a great series and sadly I believe it will be ending on its 8th issue. I really enjoy this series ,and I am hoping they will make another series to follow up to this one.
Posted by Whats The Goods? at 10:37 AM