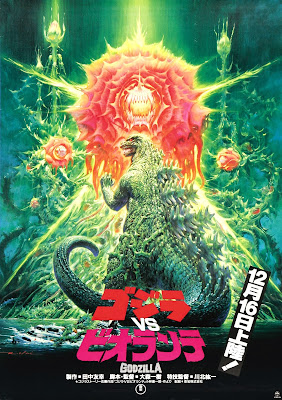 The Plot:
The movie opens up immediately after the events of The Return of Godzilla. A science team is digging through rubble ,and discovers a sample of Godzilla's skin. The team packs it up for research but is soon attacked by an assassin who steals it ,and escapes the site.

We then cut to a science institute in a Middle East country called Saradia. There is a scientist there named Genshiro Shiragami working on an experiment that will make a plant that can grow in the desert , and rejuvenate it self never dying. Shiragami was looking forward to returning home with his daughter but the base is soon attacked by terrorist ,and bombed. Shiragami looses his daughter Erika in the attack.

5 years later Shiragami is now studying the psychic ability of Roses with a Psychic named Miki. Soon Shiragami is recruited by the government to help develop an Anti-Nuclear Bacteria in order to combat Godzilla. The government believes that Godzilla will soon be returning. The Japanese has come up with a plan for this Anti-Nuclear Bacteria that will devour the radiation in Godzilla ,and kill him. We also learn that they have built a new ,and "Improved" Super X II. The Super X II has a synthetic diamond mirror on the front of it that is intended to absorb Godzilla Radioactive breath ,and reflect it back at Godzilla. 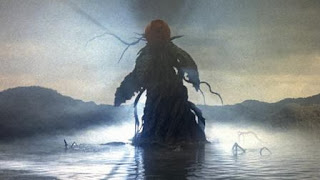 Mean while an organization is demanding that Japan turn over the Anti-Nuclear Bacteria to them or else they will set off an explosion at the volcano that is holding Godzilla. Japan decides that it has no choice but to surrender the Anti-Nuclear Bacteria. So they go to turn over the Bacteria but the assassin appears again ,and kills the person who had the detonator to the bombs. The detonator is destroyed and Godzilla is freed. Upon Godzilla's release Biollante begins calling out to Godzilla.

Godzilla begins heading for Biollante ,and the military begins combat with Godzilla. The Super X II 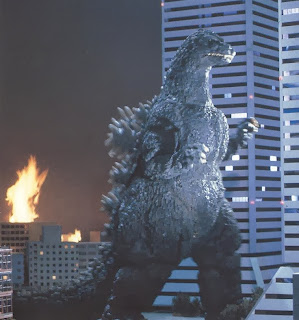 mobilizes to meet Godzilla in combat. This time the new Super X II is controlled from a remote location so that there is no need to have a crew on board ,and Jeopardize their lives. The battle between the Super X II ,and Godzilla begins, it looks as thought Godzilla is no match for the Super X II this time. The diamond mirror keeps blasting Godzilla's radioactive breath back at him, causing him to hurt himself  every time he attacks. All of the sudden the Diamond Mirror begins to melt, the constant blast of Godzilla's radioactive breath eventually proves to be to hot for the synthetic diamonds and reduced the effectiveness of the mirror and also made the ship vulnerable to his blast. The Super X II is forced to retreat ,and Godzilla continues his march towards Biollante.

Godzilla finally reaches Biollante. Biollantes vines begin attacking Godzilla , and the two begin fighting. The plant is no match for Godzilla's flaming breath. Biollante is quickly destroyed ,and the vapors fly up into the atmosphere. Godzilla then heads to Osaka to re-energize at the nuclear power plant. Miki attempts to get Godzilla to leave with here psychic abilities but Godzilla is way to strong ,and she faints. Godzilla then enters Osaka ,and is once again met by the Super X II. The Super X II unleashes a non stop barrage of missiles ,and explosives at Godzilla but it still does nothing. In a desperate final attempt to stop him they open up the mirror hoping to reflect Godzilla's breath back at him. This plan fails as the mirror was so damaged it turned out to be a weak point on the Super X II. When the mirror is hit with the breath the Super X II explodes. Meanwhile during this battle the recently recovered Anti-Nuclear has been put into rocket launchers ,and a few ground units have climbed near by building to fire them at Godzilla. After Godzilla sees that he has defeated the Super X II he lets out a roar and the rockets are fired into his mouth while he is roaring. Godzilla seems unaffected by the Bacteria and continues on his rampage through Japan. 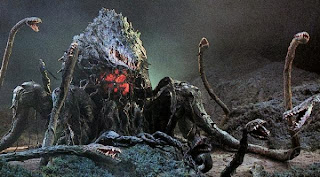 Shiragami figures out that the bacteria is not working because of Godzilla's low body temperature so a plan is put into action to lure Godzilla on to a large mine field with Microwave emitting plates that will create an artificial thunder storm that will heat Godzilla. Godzilla arrives on the mine field and the plan seems to not be working. The military is out of ideas ,and they seem to be defeated when suddenly a larger more lizard like Biollante emerges from the ground after the Biollante vapors seemed to return to the ground. Godzilla and Biollante begin fighting. Biollante's vines impale Godzilla's hand causing Godzilla to bleed a lot. Biollante grabs the injured Godzilla with his vines ,and begins to pull him in. Biollante is going to attempt to eat Godzilla. Once Biollante pulls Godzilla's head into his mouth Godzilla unleashes his atomic breath ,and delivers the final blow to Biollante. That injured Godzilla now hot stumbles into the ocean and collapses. It appears that the Anti-Nuclear bacteria has worked.  Biollantes remains dissolve in to spores and fly up into space.

The military begin to celebrate their victory when Godzilla gets up. The ocean water that was enough to cool Godzilla back down, and he has now recovered. Godzilla leaves Japan ,and returns to the ocean. Japan ,and Godzilla both live to fight another day. 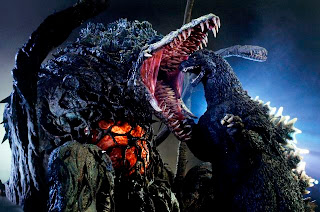 I enjoyed this movie but  not as much as 1985. I felt like it took a long time for Godzilla to finally appear in the movie ,plus the fights between Godzilla ,and Biollante were both so short. Don't get me wrong I really liked this movie I just would have liked to see more Kaiju vs Kaiju action. Biollante is one of the scariest looking Kaiju in my opinion ,and it seemed to me that the fights between the two monsters should have lasted longer. They sort of in away leave it open for Biollante to return in a later movie but that never happens . This movie has some of the best shots I have seen in a Godzilla movie(The one right of this paragraph for example). I really did like this movie so check it out like I said it is a bit slow to get to the Kaiju action but it is some of the best visually awesome. So be sure to watch this one ,and look out for my review of Godzilla vs King Ghidorah some time this week or next.
Posted by Whats The Goods? at 7:02 PM