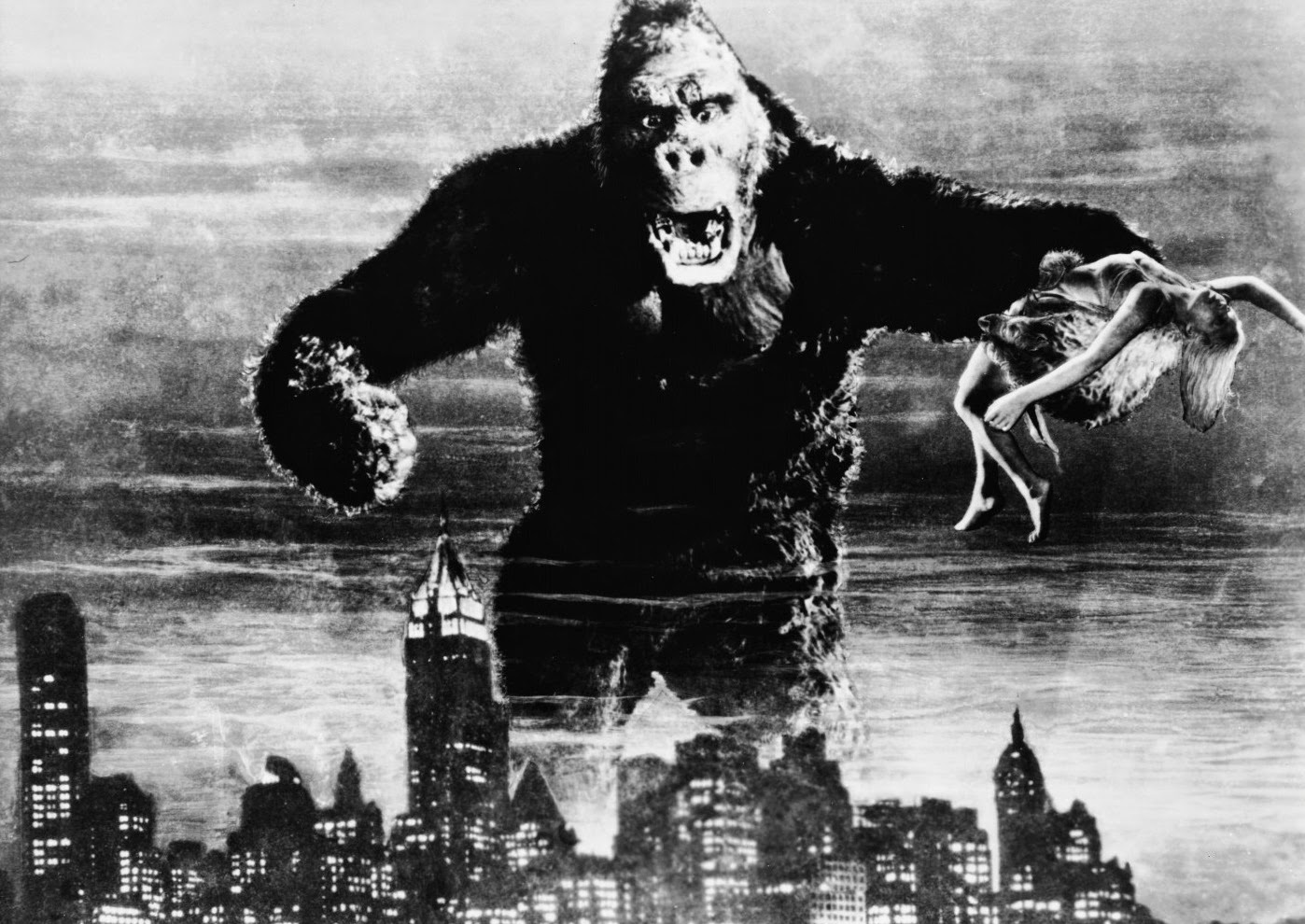 The Plot:
The film starts off with film maker Carl Denham in need of an actress for his new film which he plans to film on an Uncharted Island. Due to Denham's reputation of filming dangerous animals in exotic locations, there is no talent agency willing to give up one of their actresses for him. Denham soon runs into Ann Darrow a beautiful woman in financial need. Denham and Ann take off to film on a ship he has charted called the Venture. While on the ship Ann and the ships first mate Jack Driscoll quickly fall in love after spending the journey together. On a foggy night the ship starts to enter very low waters so the crew drops anchor and wakes up the next morning to discover that they have arrived at the Uncharted Island that no one believe existed.

We learn that Denham intends on filming a legendary being known as Kong who is worshiped by the islands natives. That day Jack, Ann, Denham, and a small portion of the ships crew go to the Island in an attempt to film. The crew stumbles across a massive wall and a tribe village that rest at the bottom of the wall. Denham begins filming the tribe but is soon spotted by one of the tribes men. The crew steps out and begins talking to the tribe, a shaman that was holding a ritual ceremony claims that, Denham and his crew have tainted the ritual by watching it. The shaman informs them that a woman which they were dressing in flowers was to be Kong's bride but the sacred ritual has been ruined. The chief of the tribe notices Ann and her blond hair, the tribe has never seen anyone with blond hair before so they offer six of their tribe's woman in exchange for Ann so that they can wed her to Kong. Jack and Denham refuse immediately and tell the tribe that they will return the next day to make friends with them. 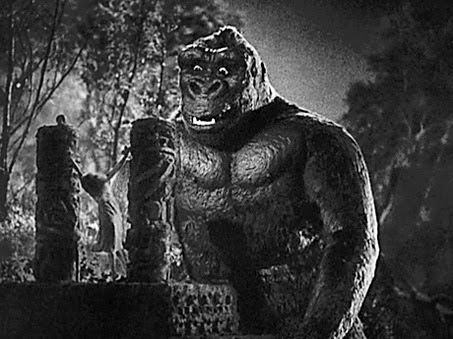 After returning to the ship Jack and Ann finally confess their love to each other and kiss. Jack gets called to the bridge of the ship and Ann stays by herself looking up at the stars think about the love that she has just found. The tribe's men soon board the ship and sneak up on Ann and kidnapper as she is too distracted by her new found love. It is soon discovered that Ann has been kidnapped and the whole entire crew of the ship takes off to raid the village. Back at the village the tribe has opened the gates of the wall to reveal an alter. The tribe binds both of Ann's arms up on the alter and closes the gate behind her. The tribe rings it's gong to signal for Kong. Kong finally makes his first appearance and immediately notices something that he has never seen in his life before, a beautiful blond woman. Kong immediately unbinds Ann and picks her up. Jack and the ships crew storm the gate and get there just in time to see Kong carrying Ann away. 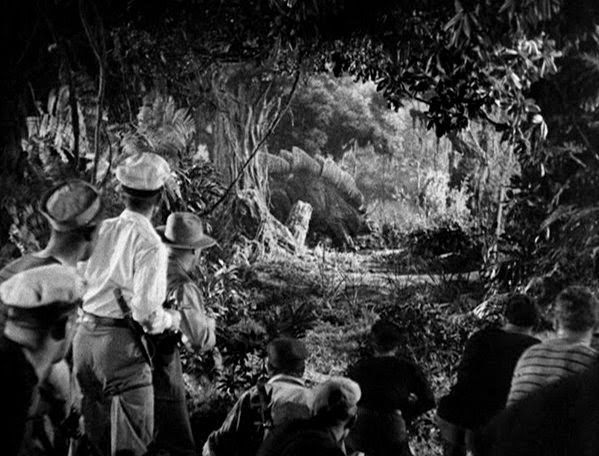 Jack and Denham decide to chase after Kong to try and save Ann, half of the ships crew comes with them and the other half stays at the gate to guard it with the captain. Jack and the crew immediately encounter a Stegosaurus which is just roaming about the jungle but the crew having never seen such a large creature before immediately begins firing their guns at it. The Stegosaurus becomes enraged and begins charging them Denham throws one of his Sleeping Gas bombs and it takes down the Stegosaurus. The crew goes closer to check out the creature and when it begins to move they deliver a fatal gun shot to it's head. Jack, Denham and the crew continue their chase and soon come upon a lake that is covered in fog. The crew determines that Kong must have swam across the lake with Ann, so they quickly construct a raft and begin to float across, but soon a feeding Brontosaurus raises it's head out of the water and they begin shooting. The Brontosaurus flips the raft causing everyone to loose their weapons. The Brontosaurus immediately kills several men, then proceeds to chase the rest of the men on to land. Jack,and about five other men manage to escape. 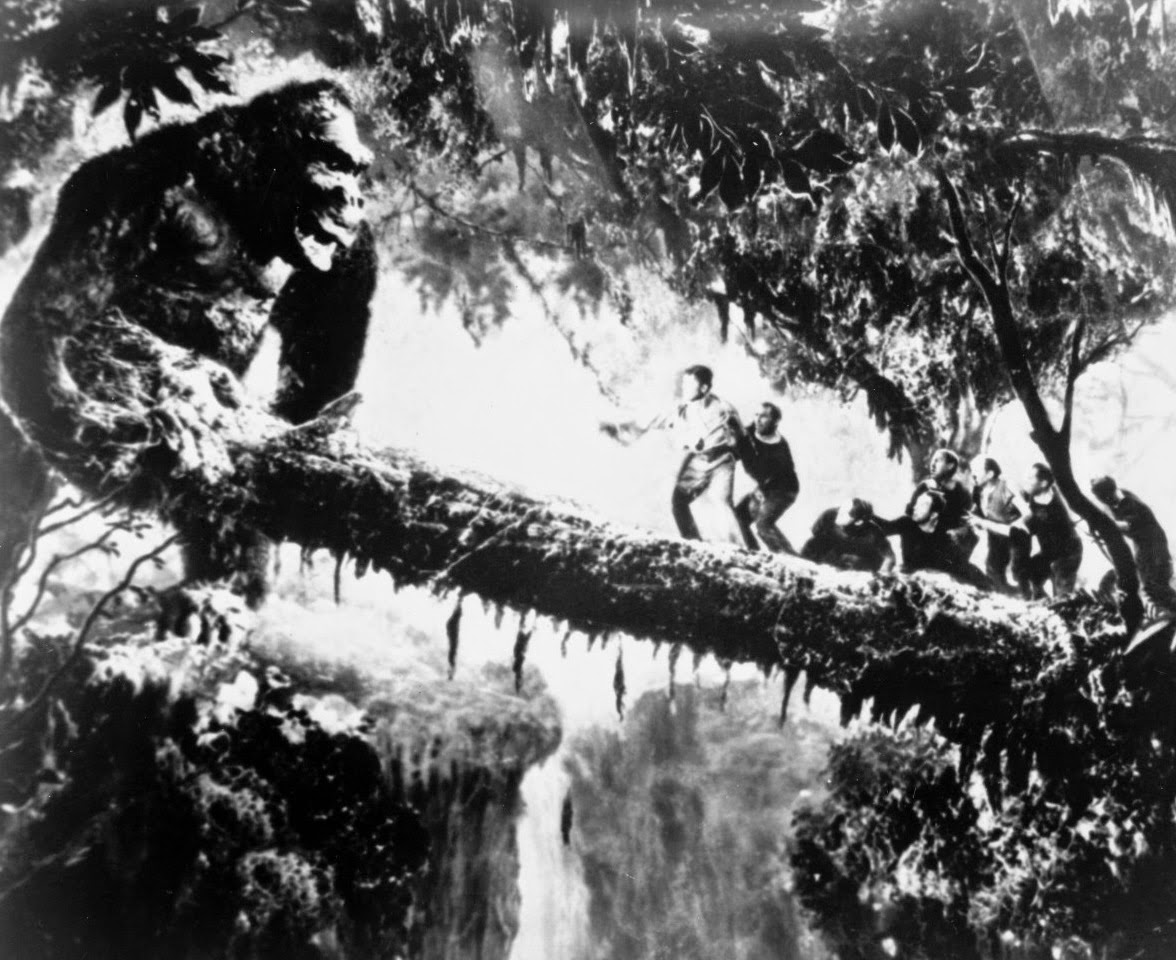 Jack and the men begin to cross a ravine on a fallen tree that Kong had recently used as a bridge to cross as well. Kong hears the men coming so he puts Ann down on a tree. Kong returns to the bridge to find the men crossing it, Kong quickly acts and lifts up the bridge and begins shaking it. Jack jumps of and grabs onto a vine to hide in a small fox hole that is in the side of the ravine wall. Kong shakes what remained of the crew off the bride and they all fall to their death except for one man who is still clinging on for life. Kong sees the man lifts the bridge, drops it into the canyon as the last crew member rides it to his death. Kong then begins trying to reach down to grab Jack, but can't get a hold of him. Jack stabs Kong's hand but Kong still continues to try and get him. Soon an alligator sized lizards starts climbing up a vine to try and get to Jack also, but Jack spots the lizard and cuts the vine before the lizard can even get near him. Kong then leaves after hearing Ann scream. 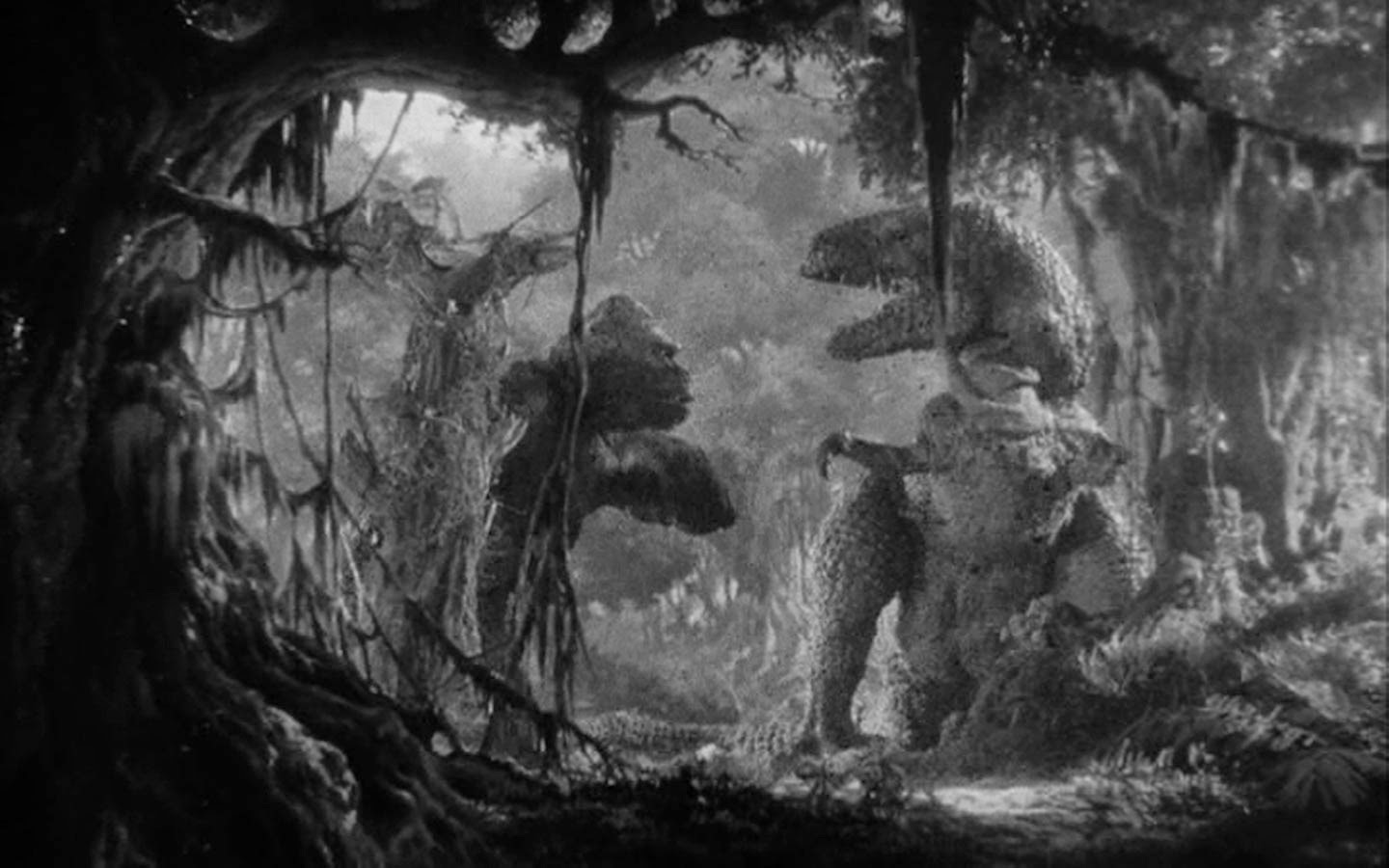 Kong arrives to find a Tyrannosaurus trying to get to Ann. Kong immediately engages in battle with the Tyrannosaurus. The epic battle between the two ends with Kong ripping the Tyrannosaurus jaw open. Kong picks up Ann and continues carrying her to his home at the top of the Skull mountain. Jack climbs up the side of the ravine wall and then Denham appears on the other side of the Ravine unable to cross. Denham returns back to the wall where the other crew members from the ship are on guard. 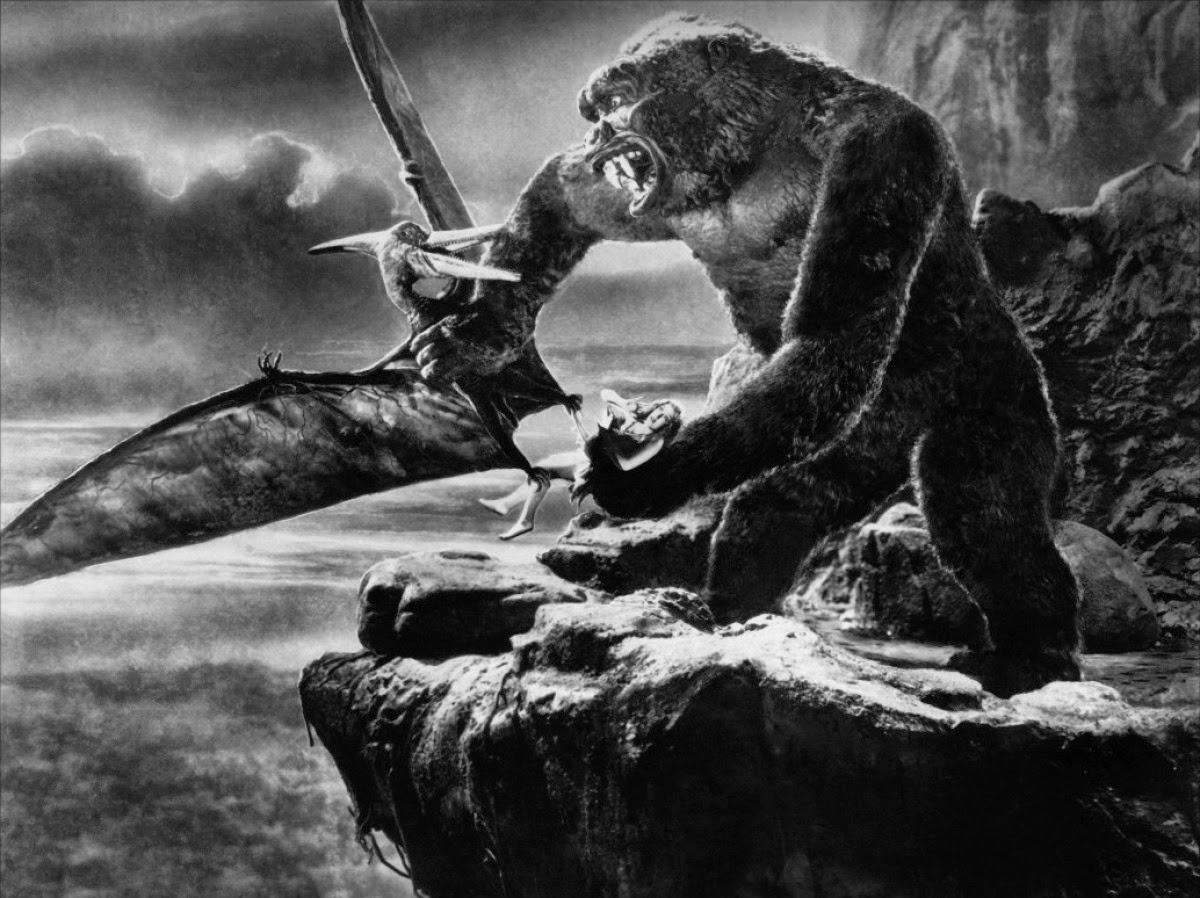 Jack continues his chase and eventually catches up to Kong at his lair. Kong enters the Skull mountain through a cave in the bottom. Kong puts Ann down so that he can catch his breath but is soon confronted by another prehistoric beast that resembles a snake with legs. Kong wrestles with the creature an Elasmosaurus it wraps it's snake like body around Kong's neck, but the enraged Kong rips the beast off him and delivers fatal blow by breaking it's back against a giant boulder in the cave. Kong then continues his climb up Skull mountain, Jack follows. Kong is immediately confronted by a Pterodactyl while Kong is distracted Jack runs to Ann helps her up and they begin their escape by climbing down a vine on the side of the mountain. Kong makes shot work of the Pterodactyl and begins pulling the vine with Jack and Ann back up the mountain. Jack and Ann have no choice but to jump into the lake down bellow.

Jack and Ann make their run to the wall where Denham and the rest of the ships crew is waiting for them. Denham then proposes the idea of capturing Kong with his sleep bombs and taking him back to New York to make millions on a show. Kong soon begins attacking the gate and soon breaks through then proceeds to destroy the village the ships crew waits at the beach and bombs Kong with the sleeping gas. 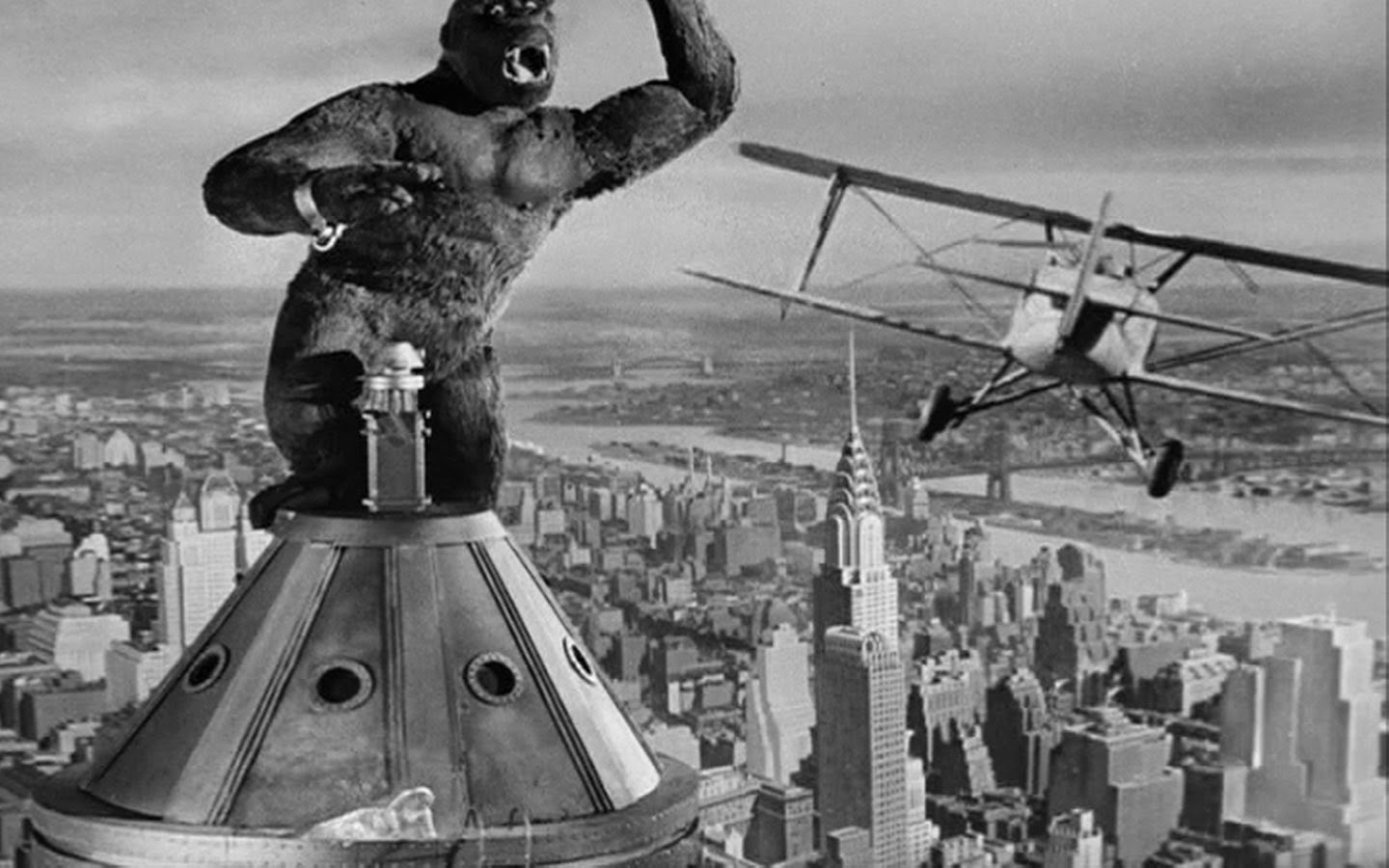 We then cut to New York where Denham is holding his premier night to show of the mighty King Kong. Jack and Ann are their by Denham's request and the press begins taking photos. Kong becomes enraged by the flashes and breaks free. Everyone flees the theatre and Kong begins his rampage through New York City. Kong manages to get a hold of Ann and while rampaging through the city with here he destroys a train and begins climbing the Empire state building. The police then dispatch airplanes to shoot Kong down. Kong reaches the top of the empire state building but only manages to fight off one of the planes. The rest of the fighter squad shoots up Kong who then places Ann down before falling to his death of the side of the Empire State building. Denham then claims that it is beauty who killed the beast and the film ends.

My Thoughts:
This movie quietly reached it's 80th anniversary last year and has truly become a timeless film. I this movie will forever be known as one of the greatest monster movies ever made. What amazes me about this film is that they were able to pull of the special effects in the 1930s. Sure the effects would are nothing compared to today's standards but they are still really impressive for 1933. I love how the movie starts off as a very slow dramatic film, but once Ann gets kidnapped the movie changes entirely and becomes a non stop monster packed action race to save Ann, and as we return to New York it slowly eases its way back into a dramatic ending. There is really nothing more I can say about this film other than watch it! This really is a timeless film and I think everyone should experience this movie.
Posted by Whats The Goods? at 6:46 PM