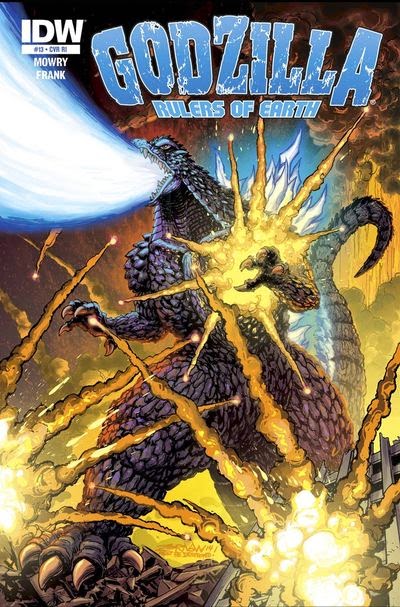 Spoilers!!!
This issue starts off on Monster Island 4 years after the events of issue #12. We learn that there has not been a Godzilla sighting for 4 years. Monster Island is now a Kaiju sanctuary that has been run pretty well with very few incidents. Zilla has just appeared off the shore of Monster Island but has not yet made the Island his home. We learn the the world governments no longer wish to fund the search for Godzilla or any other Kaiju that have not yet been discovered. The government believes Godzilla is dead and that funds can be better spent instead of maintaining a home for the Kaiju on Monster Island, and chasing after Godzilla. We then see a group of men in the arctic that are out clubbing seals when on unfortunate hunter comes across a just awakened Godzilla. The government is about to find out that they were wrong about Godzilla being dead. 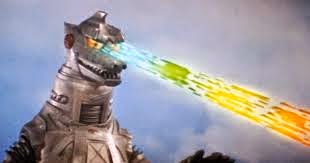 This issue is the start of a new story arc which is great to hear for this comic series. I am glad to see my favorite design of the Mechagodzillas appearing in this series. I like the whole Monster Island sanctuary thing it reminds me of Destroy All Monsters, we even see a reference from Destroy All Monsters with Rodan holding a whale it's mouth to feed on. The Anguirus vs Mechagodzilla was totally a throw back to the 1974 Godzilla vs Mechagodzilla movie. I can't wait to see where this whole Mechagodzilla thing goes can you Imagine if we see Godzilla and the Kaiju of Monster Island facing off against an army of Mechagodzillas?. I am Looking forward to the next issue and if you would like to check this series out request it at your local comic shop or you can pre-order at TFAW.
Posted by Whats The Goods? at 1:56 PM