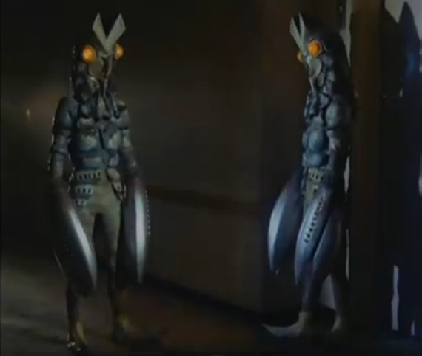 Baltan is a kaiju that looks like a beetle, similar to Megalon. Baltan has two large pincer like claws that he uses to fire hist destructive freeze ray. Baltan walks up right on two legs. Baltan has the ability to fly. Baltan also has the ability to make copies of himself and teleport making it difficult to know which copy to attack when facing him. Baltan also has the ability to change from a man size creature to a giant city building size monster. Baltan first appeared in the second episode of Ultraman where Baltan attempted to take over Earth and make it his new home.  Baltan and Ultraman fought in sky, but Ultraman won in the end by shooting Baltan down.

Baltan is a really cool kaiju design with lots of unique abilities I have never seen a kaiju use before. I really like Baltan's teleportation and cloning ability, these abilities give him a big edge in any fight. When Baltan creates fake clones of himself enemies have no clue what to attack. I think it is strange that he only used his cloning ability once in the fight against Ultraman Baltan should have made a ton of copies of himself and kept blindsiding Ultraman. I really like Baltan's appearance because it reminds of Megalon a little like he could be Megalon's cousin or something. I think Baltan could have really beat Ultraman if he used his abilities better, but the show is called Ultraman not Baltan so Baltan has to be the loser. Don't worry Baltan your a winner when it comes to being a cool kaiju.
Posted by Whats The Goods? at 3:56 PM