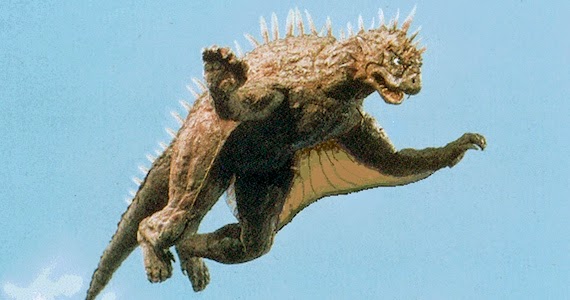 Varan is a kaiju that has a lizard like appearance. Varan has white pointy spikes that run straight down it's back, very similar to the spikes on an Iguana's back. Varan has even more spikes on top of it's scalp and three on each side of his face. Varan also tends to switch between walking on all fours or standing up straight on it's hind legs. Varan also has a web like tissue under its arms that connects to it's sides. Varan has the ability to jump high and glide through the air by spreading its arms and using the webbing to glide, very much like a wing suit.  Varan  uses his tail to smash and hit things. Varan  has thick skin making him almost invulnerable to missiles, bombs, and gun fire. Varan first appeared in Varan the Unbelievable where he reeked havoc on a small Island off of Japan then attacked Tokyo. Varan seemed unstoppable until he ingested a chemical agent forcing him to flee back into the sea. Varan later reappeared in Destroy All Monsters in the film we only see Varan briefly , but his sighting proves that he did survive the chemical attack. Varan only appears briefly in Godzilla: Final Wars in re-used footage.

Varan is a pretty interesting kaiju, I like his appearance and the weird tendency of switching between walking on his hind legs or on all fours. His gliding ability is another cool feature because at first glance you would not expect this kaiju to be able to stay airborne for an extended period of time. In Varan the Unbelievable we see that Varan can really take a hit without being affected, so if he appeared in more Godzilla films he really could have been a force to reckoned with. Varan was orginally supposed to be one of the monsters in Godzilla, Mothra, King Ghidorah: Giant Monsters All-Out Attack but he and Anguirus were replaced by Mothra and King Ghidorah. I really would have liked to see Varan appear on screen again but the popularity of Mothra and King Ghidorah won. Varan is another monster of Monster Island that has seen too little screen time, but at least Varan had his own featured film.
Posted by Whats The Goods? at 7:49 AM