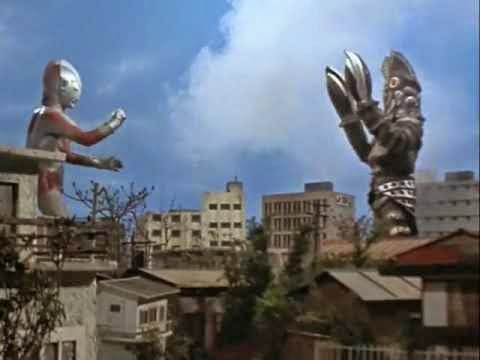 Shoot the Invader starts off at the science patrol headquarters where they just received word that a signal from a U.F.O. had just appeared on the radar in the city near by. The Science Patrol heads out to a science facility in the city to investigate the strange U.F.O. activity. When the Science Patrol arrives they discover a guard in the building that is frozen in place. The Science Patrol soon runs into Baltan who freezes one of the team members with his freeze ray.


The Science Patrol is then consulted by the worlds defense forces to figure out how to deal with this alien invasion. The Science Patrol proposes the idea of trying to figure out what Baltan wants by talking to him, and seeing if they can give Baltan what he wants to make him leave. The Science Patrol goes to negotiate with Baltan ,but they soon discover Baltan plans to take over Earth and make it his new home. Baltan then changes to his Giant form and begins attacking the city. Hyata jumps into action and transforms into Ultraman. The Ultraman and Baltan then have a battle in the sky. Baltan closes his claws on Ultraman, but Ultraman uses his strength to break Baltan's left claw. Baltan then begins flying after Ultraman and shooting at him with his freeze ray. Ultraman manages to dodge Baltan's attacks and lands on the ground. Ultraman then shoots Baltan out of the sky with his power beam.  Ultraman then uses his special vision to find the cloaked Baltan ship. Ultraman grabs the Baltan ship then flies away with it into space to destroy it.

This episode was pretty cool Baltan's appearance really reminds of Megalon. My favorite part of this episode was the fight sequence that took place in the sky. Baltan was an interesting kaiju because he had the ability to be small like the size of a human or to become this giant monster the size of a city building. I also liked Baltan's ability to clone himself and teleport making it hard for his opponents to figure out where to attack. This episode was a little different from the first episode because it seemed like they tried to incorporate some humor into it. The first episode was a little bit more serious then this episode was, the humor definitely added to the episode even though it was a little corny, but hey how can we complain we are watching a show with people fighting in rubber monster suits. The title of this episode was very appropriate since shooting the invader was pretty much how Ultraman won the fight.
Posted by Whats The Goods? at 3:44 PM