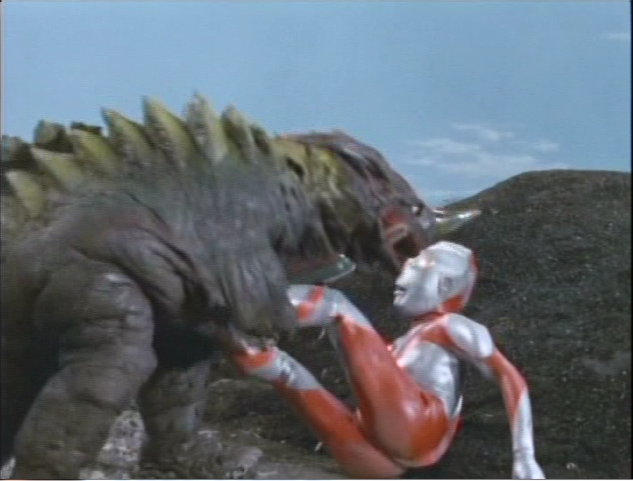 The episode starts off with Fuji and Hoshino investigating  a well that has had strange noises coming out of it. Hoshino jumps in the well to check it out and soon discovers a giant eye looking at him. The ground begins to shake and a landslide happens at a nearby power plant. The power plant begins to crumble and then we hear a roar. A translucent kaiju appears and we can see that the kaiju is the cause of the landslide and destroying the power plant.

The science patrol now regroups a the station and Hoshino informs them of a story he read about this monster. The monster's name is Neronga, he was thrown down the well thousands of years ago and believed dead, but with the new power plant built there he began using the electric from the power plant to grow bigger and stronger. The science patrol team then realizes there is only one more power plant in the area for Neronga to attack so they alert the defense forces and set up defenses at the cities main power plant. Hoshino sneaks on board and steals a gun. When the science patrol arrives there is no sight of Neronga and they find out Hoshino snuck on board, stole a gun, and is now missing. Neronga's loud roar is then heard coming from a hill over looking the power station the defense forces begin firing all their weapons at the hill. Neronga finally reveals himself after the defense forces have unloaded all their artillery. Neronga seems unhurt by the military weapons and begins destroying the power station with his electric ray. Hoshino begins shooting at Neronga with the stolen science patrol gun. Hoshino manages to shoot out one of Neronga's eyes but the gun runs out of power and Hoshino trips and hits his head. Hyata comes and helps Hoshino, Hoshino then tells Hyata that only Ultraman can stop Neronga. Hyata then gets up runs off and turns into Ultraman. While Ultraman and Neronga are fighting we learn that Ultraman can only fight for so long because if the light on his chest stops blinking he is out of power. Ultraman grabs Neronga by his jaw and horn, then snaps Neronga's horn over his knee. Neronga is now rolling around on the grown in immense pain. Ultraman pick Neronga up over his head then throws him at the hill Neronga now seems motionless and dead, but to be sure Ultraman fires his ray and blows Neronga into thousands of pieces.

This episode was pretty cool I liked how this episode the kaiju Neronga was not another monster from space. I like that Neronga had a history and originated from earth. Neronga's ability to turn invisible and fire electric bolts is a pretty good battle tactic but like all the monsters I have seen fight Ultraman so far none of them use there key abilities against Ultraman well. We see that Ultraman is unaffected by the electric bolts but Neronga should have tried to sneak up on Ultraman by turning invisible. The only reason I can see for Neronga not turning invisible while fighting Ultraman is that Ultraman has enhanced sight that allows him to see invisible things maybe? Like in the previous episode where he fought Baltan and spotted Baltan's invisible ship. I would like them to explain Ultraman's powers a little more in the episodes like they did this episode with explaining the light on his chest.  One thing that was cool about this episode is that not only did Neronga have Baragon's roar, he also was a reused and redesigned Baragon costume. A funny thing they did in this episode was recreating the scene from Frankenstein Conquers the World where Frankenstein lifts Baragon over his head, but instead this time it was Ultraman lifting Neronga.Another cool episode with a little Easter egg in it.
Posted by Whats The Goods? at 10:59 AM