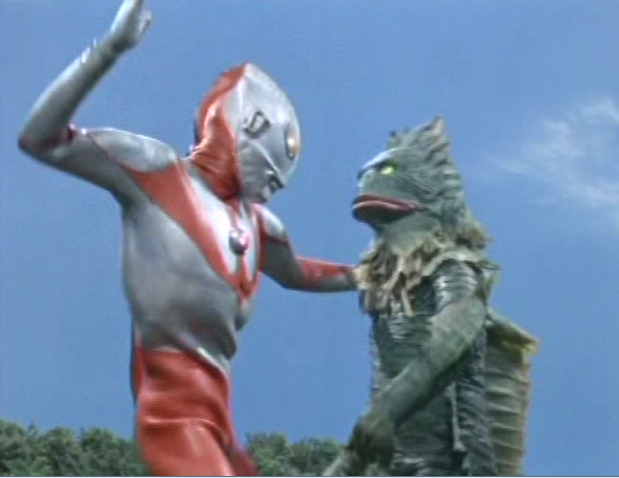 This episode starts off with a space ship that is launching from Earth to help with the development of Jupiter. The ship soon explodes after launch and the Science Patrol discovers that the ships was carrying six nuclear bombs. One of the bombs exploded in the ocean and four more were recovered, but the sixth bomb is still missing. Shortly after a ship is attacked by Ragon a giant humanoid looking sea creature that was mutated by the nuclear explosion. Ragon soon makes land fall and begins attacking a hotel where Fuji and Hoshino are on vacation. Fuji alerts the scinence patrol and Hyata arrives. Hyata soon spots the sixth nuclear bomb resting on Ragon's shoulder. Hyata becomes Ultraman after Ragon shoots down the science patrols ship. Ultraman grabs the bomb just as it is about to fall off Ragon's back. Ragon begins attacking Ultraman, but Ultraman is at a disadvantage because he now only has one hand available for use because the nuclear bomb is in the other. It does not look good for Ultraman as Ragon keeps landing blows on Ultraman and hitting Ultraman with a radioactive breath. Ragon then grabs Ultraman's arm and knocks the bomb out of it. The bomb then hits the ground and becomes armed. Ultraman knows he only has 20 seconds before the bomb explodes so he reacts quickly by hitting Ragon with his power beam. Ragon falls into the ocean and Ultraman quickly grabs the bomb and flies it out to space just before it explodes.


Ragon was a cool monster he reminded me a lot of Gargantuas if they had a baby with the Creature from the Black Lagoon. Ragon was a pretty cool monster in my opinion and I think he can take the Gargantuas and Frankeinstein in a fight because he has the advantage of his Radioactive breath. Ragon definetly gave Ultraman a hard time but knocking the bomb out of Ultraman's hand gave Ultraman the urgency he needed to win the fight.  Ragon was not completely destroyed like the other monster he only fell into the ocean so he might still be alive waiting for his time to attack again.
Posted by Whats The Goods? at 2:03 PM