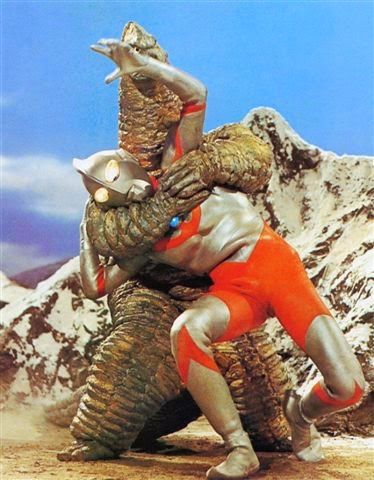 This episode start off with a group of four research scientist being sent to an island to observe and research the wild life. Contact with the scientist is lost as soon as they arrive on the island. The science patrol sets out to see what happened to the missing scientist. 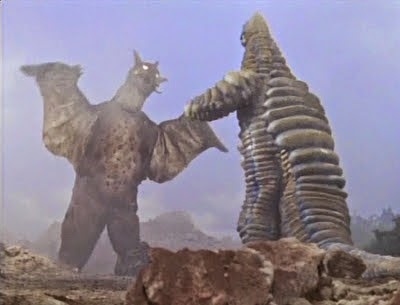 We then see a battle between two giant monsters Chandora and Red King. Chandora is already bleeding and Red King is continually throwing boulders at him. Red King grabs Chandora and begins hitting the beast, Chandora then uses its tusk and fangs to bite a chunk out of Red King's arm. Red King becomes enraged after getting bit and rips off Chandora's wing. The already bloodied Chandora now has a massive bleeding wound and retreats. As Red King watches the dying Chandora run away we see another Kaiju named Magular poke its head out of the ground to silently observe the after math of the fight, avoiding all conflict with the powerful Red King. 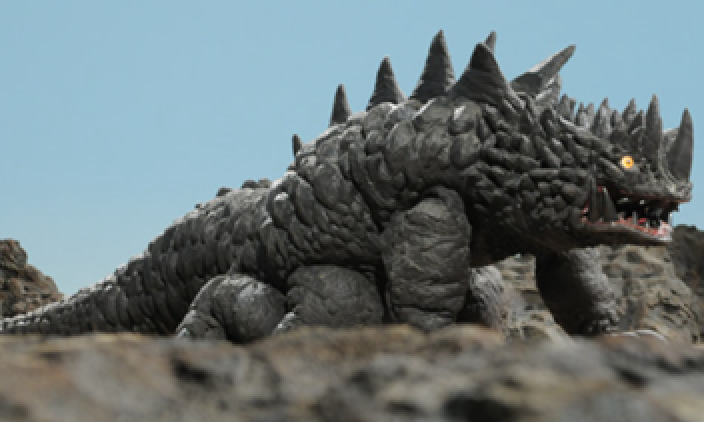 Hyata along with the Captain encounters Magular on the westside of the island. The other group with Fuji and Arashi encounters the blood thirsty plant Sunflan. Hyata and the Captain manage to take down the giant Magular pretty easily with two grenades. Fuji and Arashi quickly deal with the Sunflan plant by using their ray guns to burn it's vines.

Hyata then becomes Ultraman and begins fighting Red King. As Red King is lifting a boulder to throw at Ultraman, the boulder explodes from Ultraman's ray blast. The disoriented Red King gets grabbed by Ultraman and tossed around like a rag doll. Ultraman delivers a few more blows to finish off Red King. After Red King's defeat the science patrol sets up three crosses as memorials to the three scientist that were killed on this dangerous Island.

This one of my favorite episodes so far because of the massive amount of monster action from start to finish. The fight between Chandrah and Red King was just bloody and brutal like all kaiju fights should be. It was a little lame that Magular was so easily killed by two grenades when it looked like it was covered in hard armor like spikes. I did not understand the purpose of Pigmon, at first I thought "wow now the science patrol might have themselves a monster companion for future episodes now" but nope they crushed him. Maybe Pigmon's purpose was to show that not all monsters are bad and the we may encounter so more friendly ones in future episodes? The only thing that I do know is that, Ultraman proved that Red King was not such a mighty king of the Monster Zone after all.
Posted by Whats The Goods? at 8:42 AM