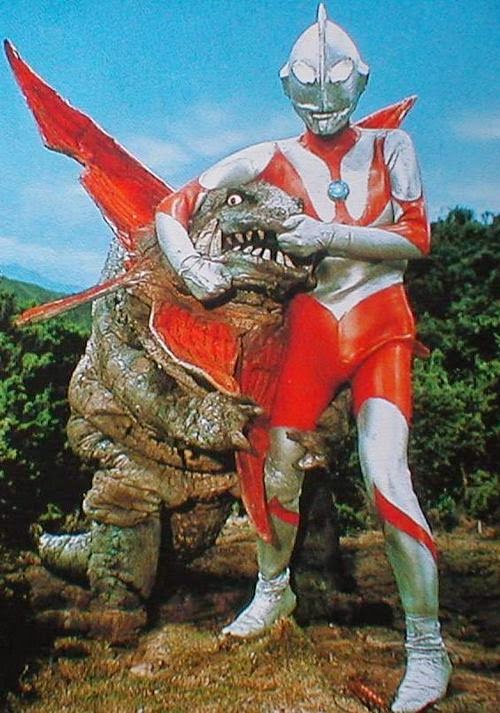 This episode starts off after a devastating hurricane in a small town. The town's roads were destroyed and repair crews rushed to fix them but they kept falling apart because of landslides. We soon learn that the cause of the landslides is a giant monster that has been traveling underground.


The monster Gabora rises from the earth and begins walking towards a uranium storage facility. The science team devises a plant you use the uranium isotope as a way to lure the monster away from the uranium facility and the town. 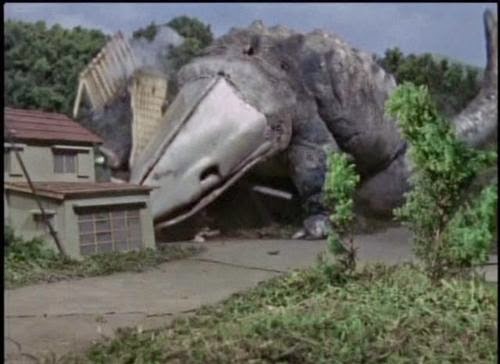 Gabora immediately takes the bait and begins chasing the helicopter which is dangling the uranium like a karate on a stick. Once Gabora was lured away from the town the plan was to drop the uranium so that the monster would feed on the uranium and the army could attack while Gabora is feeding on the uranium.

The uranium fails to drop and the helicopter piloted by Hyata gets knocked out of the sky. Gabora's armor covering it's head opens up and his head blossoms out of it like a flower. Gabora begins to approach the uranium, but Hyata realizes he is in danger because if Gabora starts feeding on the uranium the beast will spread radiation across the nearby area. Hyata then decides it is time to transform into Ultraman.

Ultraman jumps right into action and pulls Gabora away from the uranium. Gabora furiously begins firing his radioactive beam all over the valley causing trees to fall and mountains to crumble. As Ultraman rides Gabora like a bucking bull, Ultraman then rips off one of Gabora's armor plates and the monster begins to scream out in pain. Ultraman does not hesitate and rips off a second armor plate. Gabora is now just flailing around in excruciating pain. Ultraman jumps on top of Gabora and begins beating the creature to death. After many hits Gabora finally died from all his wounds.

This episode was pretty cool, Gabora was the last monster in the Ultraman series that the Baragon costume was used to create. In previous episodes we saw Neronga and Magular which were also redesigned Baragon costumes. Each monster has their own unique look and they all look like they are in the same family of Kaiju, but never do they look like the same monster. My favorite design was Magular, but I did like the concept of Gabora's armor skull dome he had. The perfect monster in my opinion would be Magular's spikes with Gabora's armor skull and Neronga's ability to go invisible. I enjoyed this episode because it is nice to see one of our favorite monsters Baragon's relatives appearing in other settings. The Ultraman series although very corny manages to hit every that special spot of nostalgia inside every kaiju movie fan. If you haven't picked up this series yet and you really enjoy show era Godzilla and Gamera movies you will love this show. I find it to be the perfect thing to watch when I want a monster movie fix but don't have the time to watch a full movie I can watch a quick episode.
Posted by Whats The Goods? at 6:46 PM