Movie Review: Yongary,Monster from the Deep [1967] 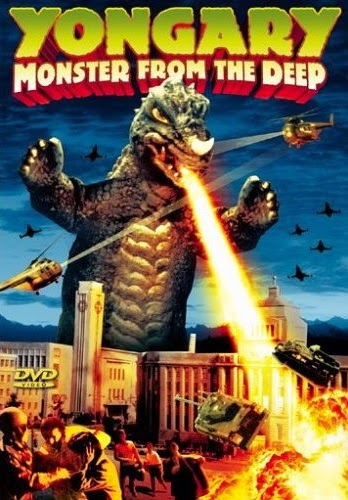 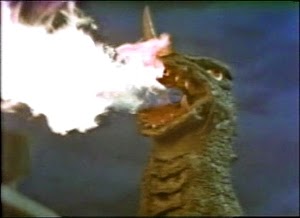 The Military immediately attempts to engage Yongary in battle, but fail miserably. Bullets and tank artillery do not hurt this reptilian monster. Yongary treks across Korea knocking down buildings with its spiked tail, and burning cities with it's fiery dragon breath ,as the military stands by with no weapons strong enough to hurt this monster.

Yongary stumbles upon an oil storage facility and begins to feed on the oil. The oil must be what allows Yongary to spit fire out of it's mouth. Back in the Middle East where Yongary originally lived there was a large supply of natural gas and oil underground to keep the monster satisfied as it slumbered underground waiting to be disturbed by man. While at the oil facility a boy named Icho shuts the oil tanks down so that Yongary doesn't grow too strong from feeding on the oil reserves. Yongary goes into a fit of rage, and destroys a tank full of ammonia. The ammonia is the first thing we see irritate Yongary. Yongary begins itching and flailing trying to get the ammonia off it's body. 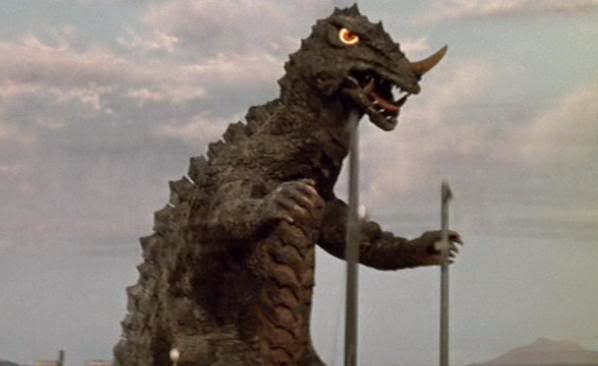 Icho returns the news to the military and they devise a plan to spray Yongary with an ammonia mixture. The mixture appears to work at first and knocks the monster out allowing the military to open fire with their strongest missiles. The military believes they have won but they soon learn that the monster still lives.

The scientist go back into the lab to develop a better and stronger ammonia compound that will kill the monster this time.The military begins an aerial attack on Yongary. Yongary reveals another one of it's abilities in this fight, the deadly sharp beam it fires from its horn can slice planes and cars cleanly in half. Many fighter pilots die in the battle with Yongary and only a few manage to retreat.

The military then puts their last plan into action and sends out a helicopter to spray Yongary with the new ammonia mixture. This time Yongary flails around in pain and eventually collapses near a river. The monster slowly and painfully dies as the poison from the ammonia flows through it's body causing it's organs to shut down one by one.

This movie was overall pretty good, I only have a few complaints but I did enjoy this movie. My first complaint was that whenever Yongary used it's fiery breath they used a low camera angle to show Yongary's head that allowed the viewers to see the metal flamethrower nozzle that was placed in the head of the costume, seeing the metal nozzle really took you out of the scene. I don't understand why they didn't use a higher angle or even just get a shot from a different side of the monster like the back or either side not the front. The second thing that bothered me in this movie was when they had Icho start dancing around with Yongary, when Yongary woke up after the first attack. Icho believed Yongary was dancing, but I prefer to believe the monster was still shaking off the remaining ammonia residue. The music they played in the dance scene did not help the situation either they made it seem like Yongary was really dancing. If they just left the scene with no music and the military pulling Icho away from the monster, and yelling at the kid for being an idiot that would have made the scene much better, instead they went with the goof music. Other than the dance scene, and the bad camera angles during the fire breath I had no complaints about this movie. I would have said this movie was equal as good as a Showa era Gamera movie but the dance scene just hurt it.  The movie did have a nice little message about how man was the cause of this monsters awakening and that Yongary was really just an innocent creature that didn't know better similar to King Kong. I also feel like the Yongary's consumption of oil was also a slight symbol and jab towards man's over consumption of earths resources. This movie is a good watch so pick it up if you want to add to your Kaiju movie collection.