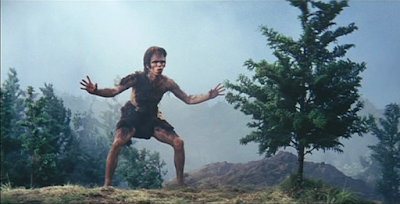 Frankenstein is a probably one of the most famous monsters in the world, Frankenstein is a name that was known almost every household even before he appeared on the big screen. This Frankenstein Monster is a kaiju which differs slightly from the original Frankenstein story. This Frankenstein came into existence because the Nazi's have discovered the original Frankenstein's heart and were transporting to Hiroshima Japan. Unfortunately for those Nazi's they arrived in Hiroshima the day the U.S. dropped the atomic bomb. The bomb destroyed the city and killed everyone involved with the Frankenstein heart experiments, but the heart survived. After several years the heart recovered and grew into the Frankenstein monster. At first Frankenstein had the appearance of a child but due to  the radiation from the bomb it had accelerated his growth and he grow rapidly into a giant monster the size of a building.

When it comes top describing the kaiju Frankstein's I would describe him has a supper tall man, with the traditonal flat top Frankstein head but he has a regular skin tone as opposed to the traditional green Frankstein skin, the kaiju Frankenstein also wears animal furs making him look more like a giant caveman than Frankenstein. His abilities are rapid growth / regeneration, alleged immortallity because of his undying heart, and he is also very strong due to his large size.

In the movie Frankenstein conquers the world he battle Baragon in a small mountain. Baragon had been moving underground destroying houses, and eating villagers. Frankenstein and Baragon battled for awhile but in the end Frankenstein won but due to Baragon's digging both monsters ended up falling into the earth never to be seen again. Many years later it was discvored that due to injurys Frankenstein sustained during the battle several cells broke off of him in the mountains. Some of the cells were carried out to see and the rest settled in the mountain these cells later grew to create the kaiju Sanda, and Gaira resulting in the War of the Gargantuas.
Posted by Whats The Goods? at 4:22 AM