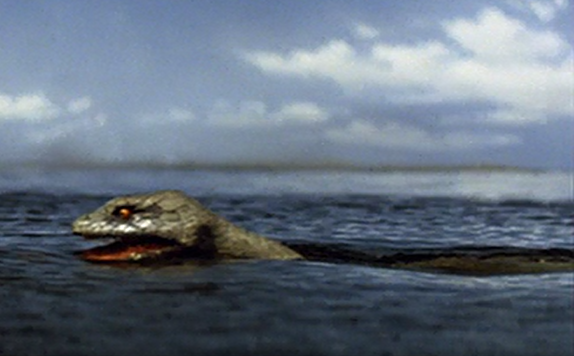 The Giant Sea Snake has the appearances of a snake but the end of it's tail has  fin like appendages on it. There is nothing to complex about this giant sea snakes design it is pretty much just an oversized snake . The Giant Sea Snake's means of attacking it's prey would be it's bite, and ability to constrict. Being a "Sea" snake clearly it has the ability to swim.

The Giant Sea Snake appeared very briefly in King Kong Escapes where it fought King Kong but was out matched by Kong's size and strength. The Sea Snake never appeared in any other movie so it is unknown what happened after the battle with Kong in the bay of Mondo Island. Did the Sea Snake live or did it die from its wounds?
Posted by Whats The Goods? at 9:09 AM