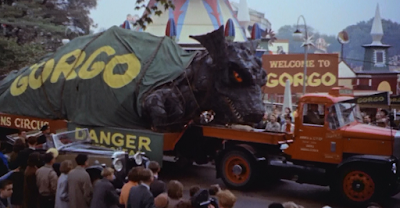 Gorgo appeared after a volcano eruption off the shore of Ireland. Gorgo was easily captured after first appearing, despite being large Gorgo was only an child when it emerged so it was easily caught. At the time when it was caught people intended to use Gorgo as a circus attraction and brought Gorgo to London to make some money. Once Ogra (Gorgo's Mother) emerged the captures figured out the Gorgo was only a child compared to the massive size of Ogra. After Gorgo's mother ripped through Ireland and England, Gorgo was freed and saved by his mother Ogra. Both Gorgo and Ogra returned to the ocean and were never heard from again.
Posted by Whats The Goods? at 4:35 AM