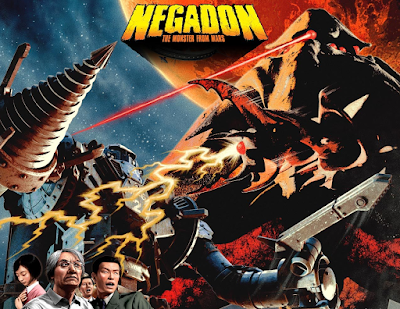 The Synopsis:
Negadon takes place in a time where planet Earth has finally mastered space travel and has been using it to travel through space to terraform planets and make them habitable to humans. When an exploration crew pulls a strange boulder from mars and returns to earth the ship explodes upon re-entry into the atmosphere. It turns out what they dug up was not a boulder but the egg to a Kaiju (Negadon)that rises from the wreckage of the crash. A professor who had worked on a giant robot to use for mining and construction decides to use his robot the Miroku-2 battle the giant monster.


We see in the flashbacks from 10 years earlier that the professor had a daughter who died in an accident that occurred during the construction of the giant robot. The professor had since gave up on his work and slipped into a depression. Until he had seen the monster attack Japan he felt he no longer had a purpose in life.

Negadon right off the bat began attacking the city the first thing it did when it rose up from the crash was set up off an explosion with a giant beam. The military launched an attack on Negadon but all weapons were useless and Negadon sent out another beam from one of it tendrils  and destroyed the entire military force with the once quick blast. That is when the professor jumped into action and began fighting Negadon with the Miroku 2. The battle goes on for sometime but when the Professor realizes that it will take a giant explosion to defeat Negadon he latches on to Negadon and drags him into space. The professor sets the reactor on the Miroku 2 to explode and he attacks Negadon and drives the Miroku 2's drill straight through Negadon's eye then explodes.

My Thoughts:
The animations and graphics for this film were incredible it was only 27 minutes long but they crammed a nice amount of action in and managed to tell good story. The film had lots of nods to classic Kaiju films. I suggest picking it up if you can find it cheap like here I would not pay more than $10 and even that is a lot. This is practically a fan film but it is a great one so check it out.
Posted by Whats The Goods? at 10:47 AM