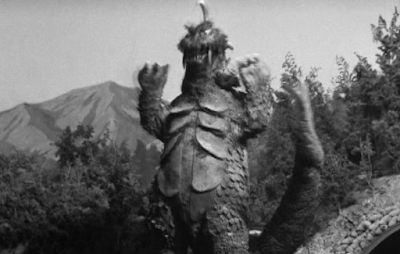 Gomess are giant dinosaur like monsters with plate armor covering their bodies. Gomess have a horn at the top of their skulls and two long tusk coming from their mouth. Gomess do not really have any special abilities besides their strength, armor like skin, and the ability to dig underground. The first Gomess appeared when it was woken by a crew digging a tunnel for a high way. When the Gomess began attacking the crew a Litra happened to have recently hatched and the two monster fought. The Litra killed the Gomess ,but the Gomess also left inflicted fatal wounds on the Litra causing it to die shortly after. I believe other Gomess have appeared across other Utlra series but I have not seen those appearances yet so I will update this entry once I see them.
Posted by Whats The Goods? at 5:30 AM