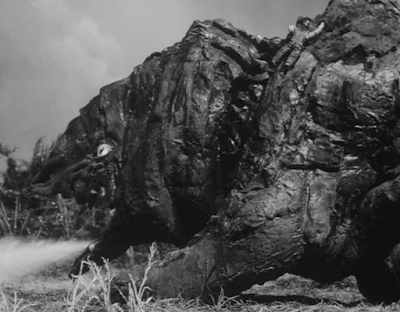 Monster Name: Gorgos
Movie Appearance: Ultra Q (T.V. Show)
Gorgos is monster that is made out of rock and when very still can almost camouflage as a mountain. Due to it's heavy weight Gorgos tends to stay on all fours and drag it self with its front arms using as little energy as possible. Gorgos has the ability to rebuild it self when blown up, as long as its glowing core is not destroyed. Gorgos also has the ability to spray hot steam out of it's mouth. Gorgos was killed by a wild mountain man who removed Gorgos's core and shot it with a police officers pistol. Ultimately Gorgos's slow moving pace was the result of it's death as the man was able to easily climb onto the monster's back to kill it. Gorgos never displayed more energy and speed than when it realized that it was about to be killed, the creature stood on it's hind legs desperately trying to fling the mountain man from it's back. Another Gorgos was never seen again after this Gorgos's body was buried in an avalanche. 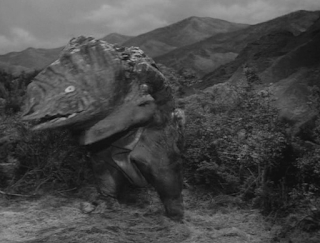