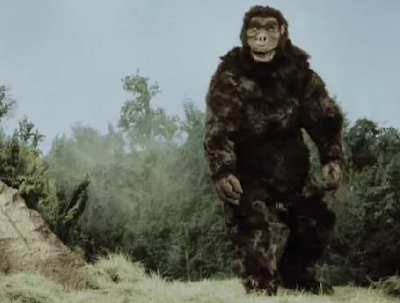 
Goro is a giant monkey that became giant by eating chemically enhanced wall nuts that were created during World War 2 to make soldiers stronger in battle, the effects of this chemical on Goro the monkey was extreme growth. Goro is only a giant monkey so he does not have any powers or special abilities besides once that a monkey would have such as strength, agility and the ability to jump great distances. Goro went a small  rampage when his adoptive father Goroh was arrested for stealing food to feed Goro. The monster attacked a small city looking for his father but was sedated then brought to an island where another giant monkey was discovered. There has been no follow up on Goro but it is presumed that he is living peacefully with the other giant monkey now on the Island.
Posted by Whats The Goods? at 10:09 AM