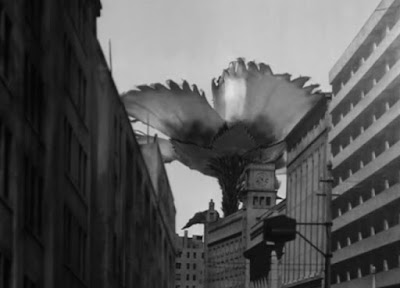 Juran is a giant flower that has roots that can move freely underground. Juran roots attack humans by wrapping it's roots around them and sucking out their blood with the large thorns that cover it's roots. Juran has also been reffered to as the Mammoth flower since that is what it basically is a giant flower. Juran also has the ability to spray pollen into the air that is poisonous. The first Juran plant was killed with flamethorwers and a plant killer spray. Juran has appeared in other Ultra series but I have not yet seen these episodes I will update this entry once I see those episodes.
Posted by Whats The Goods? at 6:38 AM