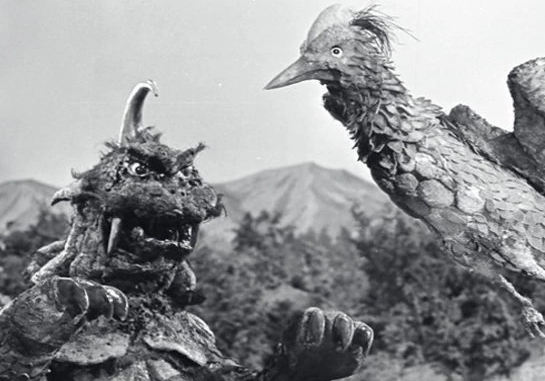 While a crew is digging a tunnel for a highway they stumble on a natural cave(tunnel system) bellow the tunnel they are working on. The crane driver claims to have seen a monster but no one believes him because he is an alcoholic, the crew pulled out  a weird boulder from the cave also after pulling the crane driver out. When a reporter hears news of a monster in the cave she decides to go and  see for herself.

After entering the cave a tremor occurs causing the reporter and her partner to become trapped in the cave they soon discover that the tremor was caused by the Monster Gomess. Gomess begins chasing the reporter and her partner through the cave while the highway crew desperately races to get the cave back open to free them. Meanwhile the strange boulder from the cave turns out to be an egg and hatches the bird monster referred to as Ritora (Litra). The reporter manages to escape the cave and Gomess quickly follows and faces off with Ritora. The monsters battle but Gomess is the first to fall because of Ritora's acid attack. But due to the damage and wounds sustained in battle the young Ritora dies shortly after. A small memorial was made in memory of the Ritora's sacrifice.

This was my first experience with the Ultraman series prequel Ultra Q the episode had a great story and the production was pretty nice. I thought it was pretty impressive that they managed to get a hold of the Godzilla costume from Mothra vs Godzilla and modify it to create the kaiju Gomess. The kaiju Litra was a little cheesy it looked like a giant cross between a rooster and a peacock. I really like the series and the DVD set came in a really nice the box ,with great art and  is really well made definitely worth picking up if you can find it.
Posted by Whats The Goods? at 8:39 AM