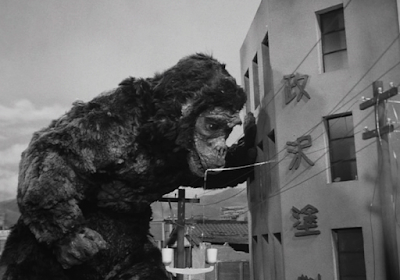 In this episode of Ultra Q we see a tour on a cable car is interrupted when I a giant monkey begins shaking the cable car wires. The monkey does not seem to be intentionally dangerous he just seems to be playing and unaware of his strength. We soon discover that giant monkey was not always giant. This monkey was one of many monkeys on in this mountain village, but this one particular monkey was raised by a mute man name Goroh who helped clean up a science lab on the island. One day when the Goroh wasn't around the monkey broke into a box that stored special walnuts that contained a special chemical used to strengthen soldiers in World War 2. The monkey ate a few hundred of these walnuts causing the monkey to become gigantic.

When Goroh gets in trouble for the lab being destroyed he storms out into the woods and discovers that his monkey named Goro has become gigantic, he begins stealing crops and food from around the village to keep Goro full. One day the Goroh is caught stealing and is arrested and brought into the city for stealing. When Goro does see Goroh for awhile he wanders into the city angry because he had not eaten or seen his Goroh. Goro begins destroying the city, and soon news paper editor comes up with a plan to sedate Goro and bring him to an island where another giant monkey was recently discovered. Goroh is freed from jail to help calm Goro by feeding him a giant jug of milk with a sedative in it. Goro is extremely happy to see his Goroh with a a jug of milk and drinks it down quickly. Goroh did not know he was feeding his monkey sedatives and begins crying when he realizes that Goro is going to be taken away and that he may not see him again.

This was a pretty cool episode the Goro suit is actually a modified Kong suit from King Kong vs Godzilla, they changed the face up a little and added a tail, the suit actually reminded me of a great ape from Dragon Ball Z almost. Goro itself was actually a good creature he was just unaware of his size and strength which in turn made him a danger to the city. It would be cool if they made a follow up episode to show how Goro was getting along with the other Giant Apes but I do not believe Goro ever appeared in the Ultra series again.
Posted by Whats The Goods? at 9:50 AM