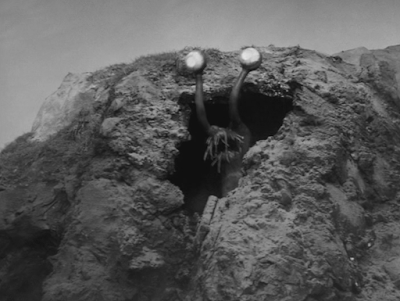 In this episode an exploration rocket returns back from mars and crashes into the ocean. Inside this rocket a pair of golden balls was found in a box. It is suspected that martians discovered the exploration rocket and sent it back with these golden balls as a gift. The safe that the golden balls are stored in gets broken into the thief takes the money and the golden balls in the safe. The thief then goes to a nearby airport and attempts to get a flight to his rendezvous point to meet up with his partner. When the pilot does not cooperate the thief and pilot get into a fight and one of the golden balls falls onto the floor and is left behind after the fight. After the thief lands with the pilot the thief sends the pilot away warning him not to call the authorities. The thief and his partner then head into there hideout inside a cave that has a hot spring running through it. As the thief is dividing the money up between him and his partner, he drops the second golden ball and it falls into the hot spring. The ball begins growing and we soon discover the that golden ball is actually the egg to a slug like alien monster species called Namegon. The Namegon hatches then kills the thief and his partner.


When word gets back to a reporter of the monster sighting she seeks out the pilot who happens to be her friend and they fly to the cave not knowing that the thief was in the same cave. Meanwhile the pilots friend had found the other egg and mistaken it for a golden nugget so he made a necklace out of it and gave it to the reporter. When the reporter and pilot enter the cave they discover the dead thief , the Namegon quickly appears and chases them out of the cave. The Namegon begins following the pilot up the mountain and the pilot tricks the Namegon into following him. The pilot runs off the mountain cliff and hides on the mountains edge, not knowing better the Namegon goes to chase him off the cliff but falls into the sea water. Turns out like regular slugs salt is very fatal to Namegon. The Namegon quickly dissolves and dies in the water.

Later on the pilot, and reporter are hanging out, while the reporter is running some experiments on some samples she leans over a burner and her necklace touches the flame and the egg attached begins growing they soon realize that the necklace had another Namegon egg so they throw it out the window and begin preparing salt water to kill the hatching Namegon. The second Namegon hatches and the episode ends.

This was a good third entry to the Ultra Q series, the monster had a big weakness and was actually pretty well designed. I really enjoy the tone this series has it tries to have a serious and it actually does not feel as campy as other Ultra series and movies I have seen. I strongly recommend picking this series up and checking it out if you haven't yet.
Posted by Whats The Goods? at 4:49 AM