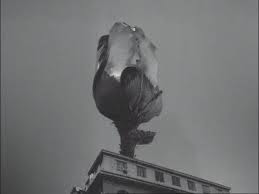 This episode starts off with an officer walking down the street then an earthquake occurs and the officer is killed by falling debris. Turns out the earthquake was caused by the roots of a giant flower moving underground. In this episode the flower is referred to as the "Mammoth Flower" but Ultra Series fans know it as Juran. The giant flowers roots began causing havoc across the city as they would ensnare victims and then suck out there blood with it's thorns. When trying to attack the flower it spat out poisonous pollen that caused a few men to be hospitalized. Although Juran is only a plant since it became so massive it became a danger to the people around it so it had to be destroyed. Juran was killed by having it's roots burned with flamethrowers and a plant killer toxin was dropped by air plane onto the plant. The plant began dying immediately and the city was safe again.

This in my opinion was one of the weaker episodes so far in the Ultra Q series. Don't get me wrong I enjoyed the episode I just found it a little boring Juran was literally just a plant doing plant things, it didn't really seem like much of a monster to me, but it did cause damage. The episode was a very basic story to giant plant gets killed with plant killer and fire the 2 things that kill any plant. Like I have said before this is a great series so check it out if you have not seen it yet.
Posted by Whats The Goods? at 6:48 AM