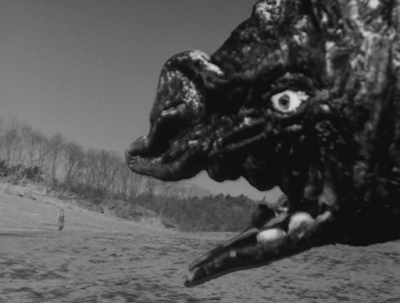 In this episode we learn that Mt. Fuji has become active and a local police man is warning all nearby residents to leave until the activity passes. We learn that there is a man who has lived in the wild for 15 years in the forest near Mt. Fuji, the man apparently got lost in the forest when he was a child and has lived there since. When the news reporter gets word of this man she decides that this will make a better story than an active Mt. Fuji causing earthquakes, and temperature spikes in nearby lakes.


One of the lakes affected by the active volcano ends up shooting a large rock out of the lake and it lands on a nearby highway. We see that the rock has a strange glowing light at the top that almost beats like a heart. The highway patrol ends up blowing up the strange rock with dynamite then dumping it in the forest near MT. Fuji. While dumping the rubble from the rock the man that lives in the forest watches from a nearby tree and notices the strange glowing rock. The rubble begins to move a join together around the glowing rock forming the monster Gorgos. When the man sees the monster he flees into the forest but the monster Gorgos spots him quickly and begins chase.

The man trips and has a tree fall on his leg but luckily the officer that was evacuating the area is able to find him and help him get out from under the tree. The forest man angry at Gorgos for causing trouble in his forest run after Gorgos and begins climbing the monster to kill it. When Gorgos realizes the man is climbing towards his glowing heart Gorgos begins flailing about to try and get the man off his back. The man finally reaches the glowing heart pulls it out of Gorgos's  back throws it up in the air and shoots it with the officers pistol. Gorgos flails for awhile more then dies. In the meantime an avalanche as started because the heat from Mt. Fuji loosened the snow and Gorgos stomping caused it to move even further. Gorgo's body is buried in snow never to be seen again. The forest man is reunited at the end of the episode with his sister and returns to a normal life living with his long lost family.

I enjoyed this episode especially after that strange Gameron episode. You stick a giant Monster in something I am bound to like it. The design of Gorgos was cool and the way it got killed was actually very believable for that way it acted. The Gorgos seemed like a lazy monster it was a 4 legged monster and all it did was drag it self by its front legs the monster seemed to but so little effort into moving around it is no wonder why the man was able to easily climb on the monster and kill it. Gorgos had no sense of urgency until it realized that the man was trying to kill it that is when the monster actually began to move around a lot. The Tarzan like story with the monster fight at the end made this episode a big winner for me.
Posted by Whats The Goods? at 11:36 AM