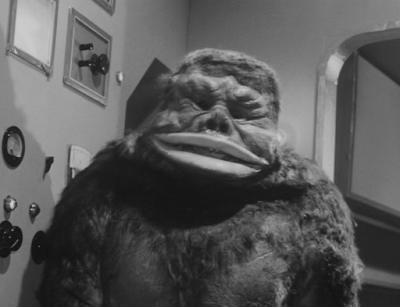 
M1 is an man sized Ape Creature. M1 is an artificial life form that was created by a scientist. M1 was only a gel like life form until it was exposed to a camera flash which caused it to have a chemical reaction and rapidly grow into it's awkward ape like form. M1 does not poses any special abilities but it does have the intelligence of a human being, so the creature is actually much smarter than it appears to be. When M1 crashed a brand new bullet train it saved a boy that had snuck on by hiding in the trains safe so that the safe launched them into space when it crashed. M1 was last seen orbiting earth with the boy in the safe their where about have not been mentioned since.
Posted by Whats The Goods? at 1:06 PM