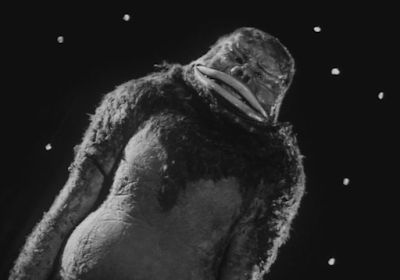 The episode starts out with the announcement of a new bullet train.  Meanwhile back at the newspaper office a camera man is packing up his brief case to do photos for the opening of the train but instead he takes the brief case which is carrying an artificial life form, coded named M1. The creator of the M1 life form was at the newspaper being interviewed about his scientific break through. When the inventor goes to open his case he soon realizes that he has the wrong case.

Mean while back at the train the photographer receives word from his office that he took the wrong case. When the photographer opens the case to confirm his mistake a photographer from another newspaper comes into the room and takes a picture of the M1 capsule. The train conductor takes the case with the M1 capsule and brings it to the main engine room where there is a safe. While storing the case in the safe it bust open and the M1 creature actually begins to grow into its full potential it turns into a man sized ape like creature. M1 freaks out the conductor and engineer making them flee the cabin. A young boy who snuck onto the train sneaks into the engine room so that he can get the full train experience when he gets there and sees no one he is surprised, then he sees M1 and thinks that M1 is a robot controlling the train when in actuality M1 has set the train at max speed and detached the rest of the cars. When the boy realizes that M1 is not a robot he tries to run away but when he opens the door to go back he discovers that the rest of the train has been detached. As the train is about to crash M1 takes the boy with him into the storage safe. When the train crashes the safe goes flying out of the train and into space. The boy and M1 survived but are both now in earths orbit.

The episode just ends there you don't find out if the boy and M1 ever returned to earth or if they are stuck in space for time they have left. This episode was a little weird and reminded be of the Gameron episode, in that it revolved around a child a lot and had a weird ending. M1 was an okay design for a kaiju it was like an awkward looking ape man. This episode overall was just okay with me not my favorite but I didn't hate it.
Posted by Whats The Goods? at 12:57 PM