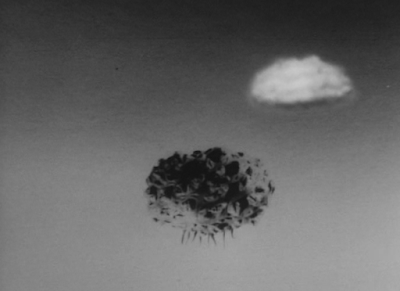 When a space shuttle returning from an exploratory mission crashes to Earth it brings a strange creature to Earth refereed to as Balloonga . The space shuttle crashed because it ran out of fuel. We quickly learn that it crashed because Balloonga feeds on all forms of energy. The Balloonga kept feeding on energy and kept getting larger and larger. Tokyo was completely shut down because all energy was absorbed, planes crashed when flying by Balloonga.

After some research by a newspaper it was discovered that this was not the first case of a Balloonga appearing on earth. A doctor had done a report years earlier about the Balloonga but was ridiculed by his colleagues for not having any proof to back his research, so the doctor stepped down and went into retirement. When the doctor was finally tracked down he suggested creating a missile that would create an artificial so that the Balloonga would be attracted to it and leave earth. Japan quickly pulled all it's resources to create the missile and quickly launch it into the atmosphere. The Balloonga was quickly drawn to it and left Tokyo and Earth. The Balloonga now remain in space feeding on the energy and glowing.

The end of this episode gives a theory that all stars are actually Ballongas that have absorbed so much energy. This episode was pretty good the story was very simple and not to complex the design of Ballonga was was pretty weird looking it looks almost like a floating brain with small tentacles coming out . Although Balloonga was basically just an ugly floating balloon it did not need to knock down buildings, or level a city to be a kaiju that caused chaos, it's ability to feed on all sources of energy was enough to cause hospitals to be shut down preventing people from getting surgeries, planes to crash, and much more chaos. Although this episode had a much more simple store than others it was still a really good episode. Ultra Q continues to impress me stay tuned for my next Ultra Q review.
Posted by Whats The Goods? at 1:14 PM