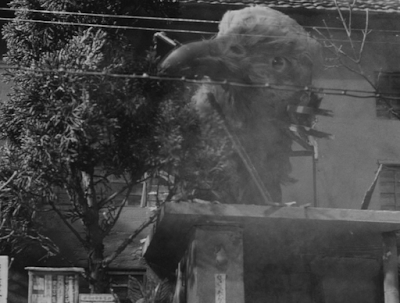 Larugeus is a white bird that has the ability to look like a small white everyday average size bird, but if the Larugeus becomes angry or hungry it has the ability to transform into a massive building sized bird in order to hunt food or defend it self. Besides being able to change sizes Larugeus can fly extremely fast when it's giant size causing high speed winds to be left in it's wake resulting in major destruction. Larugeus first appeared at a Zoo where it killed a Zoo keeper and ate all the animals at the zoo. The Larugeus then reverted back to its small form and was soon discovered by a little boy who did not know that this Larugeus was actually a dangerous creature. The Larugeus befriended the boy and helped protect him from the fishermen in his village. The Larugeus began feeding on the the villages live stock and the authories were called into capture it. Once captured the Larugeus became angered and grew into its gigantic form again and flew around causing destruction before flying out to sea never to be seen again. The Larugeus has not been seen since but it is believed to still be alive possibly feeding on the sea life as it fly's over the ocean.
Posted by Whats The Goods? at 8:06 AM