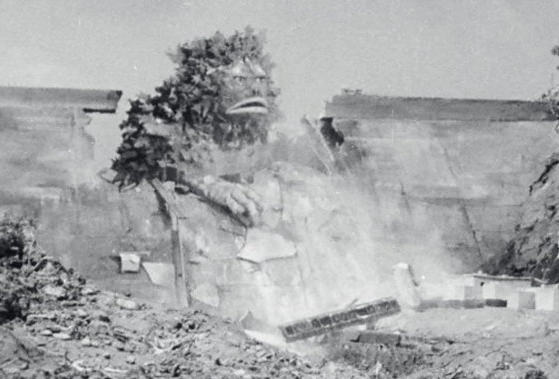 The Plot:
This episode start off with a group of boys playing down by a stream when they notice something falling from the sky slowly and gently like a balloon, but it looked like a meteor. When the boys found the strange rocks crash site it indeed was a meteor but it was as light as air, so the boys decided to make up the name "Garadama" for the strange rock.  When the kids rush the garadama back to school to show there teacher, the teacher immediately contacts the Professor Ichinotani (the Professor we have seen reoccur through out the series with Ippei, Jun, and Yuriko).

After investigating the garadama, the professor discovers that it is putting out some sort of radio signal, to where the signal is transmitting to the professor does not know,  so he sends Jun and Ippei out to check the crash site for any other possible garadama or clues. While back down by the river a massive garadama that could wipe out a city crashes in the mountains, luckily the garadama again fell gently and caused very little impact damage. The heat from the gigantic garadama's atmospheric entry caused the river to dry up .  As the crew gets closer to investigate this new garadama it begins to crack open, they then realizes that the large garadama was responding to the signal from the smaller garadama. The large garadama breaks open to reveal a giant android monster called Garamon. As the crew comes to the realization of the danger they are in they notice a boat stuck on the cliff of the river that had dried up.

Jun and Ippei jump into action, while the professor and Yuri rush at the institute to try to find a way to kill the signal in order to prevent possibly more Garamon from being deployed. As Jun and Ippei begin rescuing the people stuck in the boat the Garamon also notices and begins to move on to attack the boat. They manage to rescue the people on the boat just in time before Garamon knocks the boat off the cliff. After that Garamon begins to march toward the nearby dam and village making short work of them and destroying them. Back at the lab the professor had just finished creating a cage that would block the signal of the garadama which he believes is sending out the signal to the Garamon. The professor covers the garadama and the Garamion immediately breaks down and dies. The day is saved for now...

This is one of my favorite episodes, although the Garamon looks somewhat goofy it is somehow also a pretty creepy kaiju. Just the idea of the Garamon is dark, basically there is an alien race out there somewhere that launches off all these small garadamas and when they crash onto a planet a fleet of Garamon shortly follow to wipe out all life on the planet that way the aliens can come and take over the planet themselves. This episode is one of my favorites in the series and the great thing about that is there is a second part! That's right spoilers there is another more severe Garamon invasion that happens a few episodes later so look out for that review!
Posted by Whats The Goods? at 5:07 AM