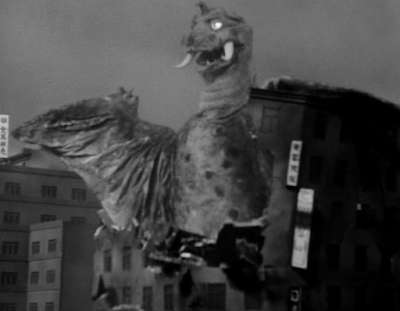 Peguila resembles Chandora from Ultraman. Unlike Chandora, Peguilia has the strength to use its wings to carry its large body and fly. While flying Peguila releases a cloud of smoke that engulfs it's body, the smoke screen makes it appear as though a giant cloud of smoke is flying through the sky and not a monster. Peguila also has the ability to shot a frost breath that freezes everything in its path but also has the ability to defy gravity and lift heavy objects into the sky such as tanks, cars, and buildings. Peguila also uses it's wings to create large gust that can topple buildings.

The first Peguila sighting was in Antarctica a science crew fought the monster and discovered that it had a weakness to a moss that was only native to the arctic. The scientist converted the moss into a chemical weapon and used it on Peguila, while the does Peguila was struck with was not lethal the monster took off and left the Antarctic. Peguila later appeared in Japan after flying for a long time from Antarctica Peguila with its ability to cause mass freezing with its breath brought about an Ice Age in the middle of a scorching hot summer. The monster brought devastation and chaos to Tokyo as everything froze instantly. The scientist managed to get a large load of the chemical onto a plane the pilot was an father who had many failures through out his life and he wanted to do something to prove he was a good man so he sacrifice him self by flying his plane into Peguila's mouth causing an explosion. While the explosion and delivery of  chemical was large this did not kill the monster but instead forced it to retreat into the sky. It is unknown what the fate of the original Peguila is but it is known that Redman the Kaiju hunter has encountered and killed many Peguila.
Posted by Whats The Goods? at 1:06 PM